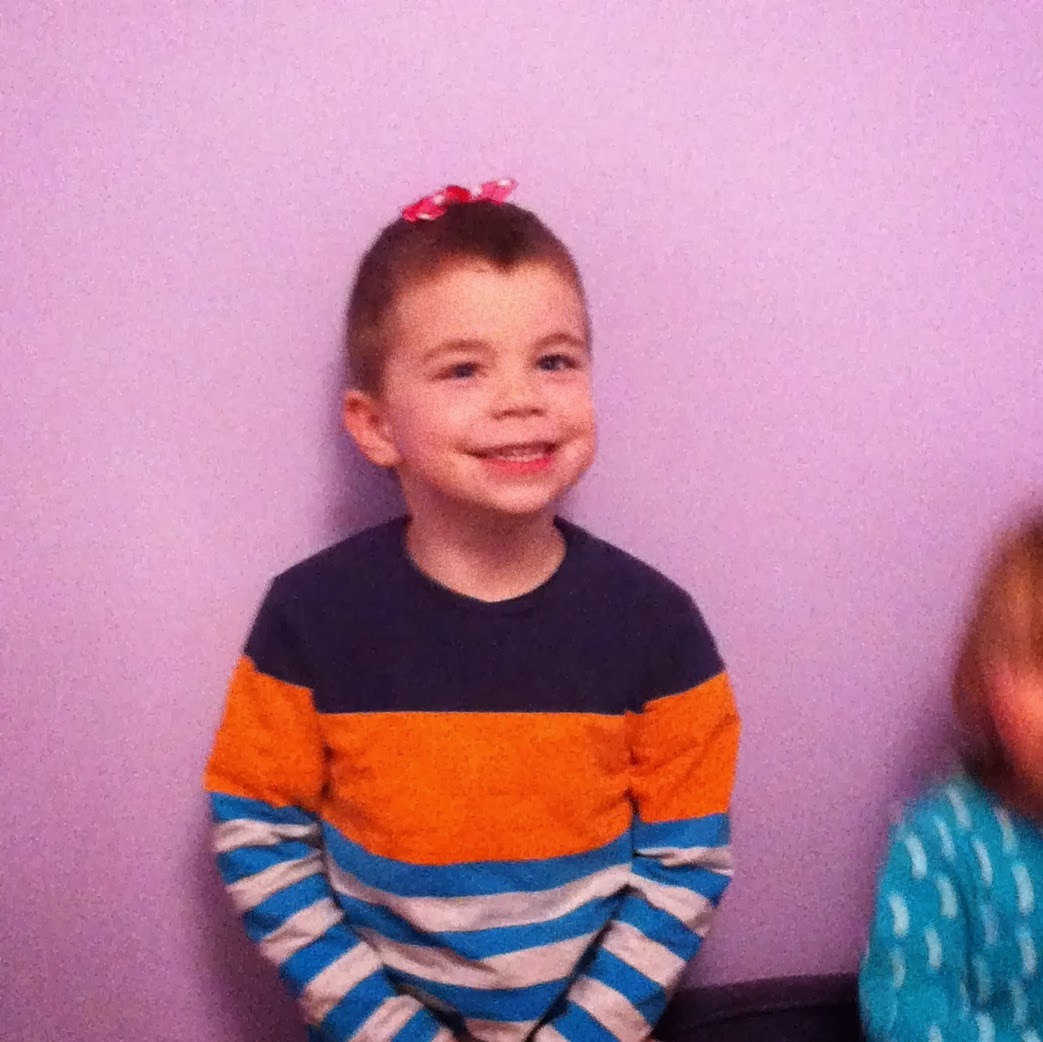 Would you let your son go to school wearing a bow in his hair?

This morning Jordan started sobbing because Nick took the bow out of his hair and told him he couldn't wear it to school.

He doesn't actually care about the bow - he's worried about teasing.

Jordan has gone to school with nail polish and with bead necklaces. In fact, he has red beads on today. He has on a shirt with various shades of purple and an orange pocket.

Last night we'd gotten hair bows for India, because her messyhairdon'tcare is always in her eyes now. I don't want to cut it. I love the mullet. But she's been opposed to bows.

We went off to get some of the clippy kind that a friend of hers has.

But you know, there's nothing comparable for boys. Boys don't get to wear sparkles or adornment or really much of anything fun or frivolous, as far as I can tell.  The older he gets, the less fun his clothes are.

So Jordan immediately wanted us to put one in his hair as well. I did. He loved it. He said he was going to wear it to school the next day.

I was fine with it. Nick was not.

Nick and I talked about it and Nick said he wasn't going to let him. "He can't. People will tease him."

My thought was, let him. If other kids tease him, he'll either take it out and decide he doesn't want to, or he won't care.

He loves adornment. He notices what I wear, what Nana wears, and he compiments us. "Oh, Mama! I like your dress!" "Nana! You look so cute!"

Yesterday afternoon I came downstairs wearing jeans and a sweater and boots, and Jordan said, "I want to change before we go out! I want to wear something cute, too!"

Now, I'd worked out and had thrown on jeans and a turtleneck sweater that was in the pile to be hand-washed. I hadn't sweated a whole lot, because our back room is cold, but let's be honest: I was none too clean to begin with.

I'd washed my feet, however. I don't know how you feel about this, but I hate putting sweaty feet into shoes or getting in bed with unwashed feet.

But I said we were only going to Target, and his outfit was totally cute, and mine was the same thing I'd had on earlier and look, I still had on my workout shirt underneath!

Thus mollified, we left without changing.

But later, Nick said, "I can tell you for a fact that I never asked to change into something cute when I was a kid."

I comment on apparel a lot - I love clothing, I love shoes, I love sparkly, flowery things, and I am always all, "Oh, that's so cute! I LOVE your sparkles! I LOVE your boots!" etc etc.

It's not that I don't say these things to Jordan: he has a dragon hoodie that I wish they made in my size. I LOVE the dragon. But like I said, for the most part, the boy clothes aren't ooh-and-ahh-worthy.

I don't know how to think about this. Should I stop talking about appearance? Oohing and ahhing over cute clothing? (Can I? Clothing and shoes are among my favorite things?) I don't want to start telling him that boys typically wear this and girls typically wear that.

It is true in terms of bows and nail polish and tutus, yes, it's true, but he's only four. I think he should wear them as much as he wants to.

I do think wearing the bow would be fine.

What do you think?
Posted by Lemon Gloria on Monday, February 10, 2014

Email ThisBlogThis!Share to TwitterShare to FacebookShare to Pinterest
Labels: clothing and shoes, the boy