That's right, I'm not from Texas. But Texas wants me anyway.

Ooh, boy, did I love Austin. And my hell, do I love cowboy boots. Or rather, cowgirl, as India is constantly reminding me.

So I can't claim to know much of anything about Texas because let's be honest: I only spent like three days there--a Thursday afternoon to mid-day Sunday. But I didn't sleep very much, so it was a lot of  awake hours.

Also, it was Austin, which apparently Rick Perry called the "blueberry in the tomato soup" that is Texas.

But I digress. What I saw of Texas, I loved. Plus a number of people I love live there, so that ups the adoration. And I went there for a reunion with people so dear to me.

So for a multitude of reasons, despite terrible politics, I think Texas is awesome.

Now let's get back to boots.

If you live in Texas you can wear cowboy boots anywhere and everywhere and nobody blinks.

Did you know that cowboy/girl boots are works of art in themselves? They're beautiful, some exquisitely so. And if you find a pair that fits you right, they feel soooo good.

I didn't know how they were supposed to fit. The first pair I tried on was wide, and as such I clomped around with my legs kind of far apart in an effort to keep them on. Nicole and the boot-store woman were like, nope, not your pair.

And I tried on some more, and some more, and eventually found a pair I really liked that also felt great, and then Nicole looked across the store and said, "Hey, look! Those are a lot like yours AND they're on sale!" 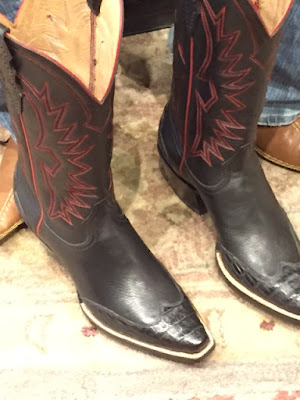 They were on sale, but still similarly priced. And the design was very similar. But not exactly. I didn't like the sides quite as much, and they didn't have stitching on the front, which seemed more cowboy booty. If I were doing to get one pair, shouldn't they be, well, cowboy-y?
If you've ever seen me try to choose anything, you know it is a process.

So I tried one on and the other. And then Nicole put one on each foot so I could see. We went back and forth and back and forth. The store owner weighed in. As did our salesperson. I was still torn.

And then the saleswoman said, "If you're doing other shopping, why don't you walk around for a bit and come back?"

I took pictures and texted them to Nick and discussed pros and cons. There was a cute young guy working in a really cool boutique we went into, so I solicited his opinion. (He, too, liked both and was torn.)
And then Nick mentioned that the pro of the ones without the stitching is that with black pants, they could just look like dressy boots. And that was that. Sale pair, no stitching.

We walked back in after like half an hour and the saleswoman said, "I was sure it was going to take you a lot longer to come back."

Anyway, I gave her my credit card and donned my new boots and she said, "Great choice. You could definitely wear those to a wedding."

People in Texas wear cowboy boots to weddings. Seriously. The dressy ones. Not the work ones. Apparently.

In fact, you see guys walking down the street wearing boots and cowboy hats and it is adorable. I mean, I doubt they put them on thinking, ooh, "I look adorable!" But they do.

Yes, I get some weird looks in DC. But anyway. It's not like I'm trying to blend.

So here I will mention that my birthday friend Rhonda was also on a cowboy boot quest. And she seemed to find a lovely brown fringed pair without great agonizing and consternation. (And as it turns out, her daughter Charlee also admonishes her for saying cowboy.)
I don't have a closeup, but look how natural she looks in her fringed boots. The fringes move really nicely when she dances.

She lives in Maine, so I need to ask how the cowGIRL boots have gone over up there. She's not one to try to blend, either.

And then, you know when I get into something, I get really into it.

Like the rabies. Dear Lord, you all know about The Rabies. And like the tiles. I bought some dragons, and some more dragons. And some bird tiles for the fireplace, for when we do it. And then I started talking about maybe tiling our sofa...

I've been looking online at cowboy/girl/person boots. Not to order now, but just, you know, for the next time I save up a pot of cash and go back to Austin to visit friends. I've gotten a little obsessed interested.

I told my friend Meg how I'd identified a couple really beautiful pairs, and she was all, "I knew it! I knew those cowboy boots were going to be a gateway drug!"

There are worse things, right? (And I really, really want a fuchsia pair...)
Posted by Lemon Gloria on Monday, November 30, 2015