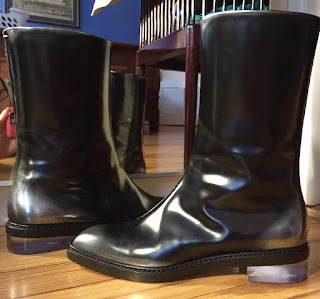 OK, I know this is a boot post right on the heels (heh) of a boot post, but as far as I can tell, a lot of you are shoe people, so this works out fine.

I mean, after I posted my cowGIRL boot post, I learned that many of my friends have cowboy/girl boots. And they shared pictures! I loved it!

Turns out I am all, "Show me your boots!"

I could pretty much look at boots all day. This is sad but true.

Anyway, on to the story!

I also got this fabulous pair of boots in Austin.

They are much more fabulous in person, and kind of hard to photograph, as they're shades of dark grey and silver patent leather. If you embiggen you will also see a wee bit of me lying on the floor taking the picture.

I haven't worn them yet—except around the house—because it's been raining and also, no matter how practical they may be, I'm not scuffing them up on my bike and on the playground.

As far as I can tell, they go with everything, including boxers and an old T-shirt.

(Also, it turns out that Maison Martin Margiela is a superspendy fancy brand. Also also, Nicole and I seem to be the only people who might call patent boots with Lucite heels practical.)

Nicole and I basically spent four hours and made it one block on South Congress Avenue. To be fair, some of that time was spent eating nachos and drinking beer with my friends. And then we took the women of the group to The Store.

Because here's what happened. The guy in the cute spendy boutique pointed us to UAL down the block, which has hugely discounted designer stuff.


Who could pass up a store like that? Nicole, who can spot a bargain the way the child catcher in Bednobs and Broomsticks could smell children, made a beeline for a wall of shoes at 40% off. She immediately began trying on shoes. And then I did. Because who wants to try on shoes alone?

After all, I had just bought cowboy boots. I hardly needed more boots.

We tried on so many things with such enthusiasm. We minced around in them. We giggled. We chatted with the store people. Nicole complimented random customers on their choices. She talks to everyone.

And finally, when it was time to decide, I was all, "You MUST get those boots. Must."

I'd already picked out a very practical pair of Robert Clergerie lace-up oxfords. And I'd sadly set aside a bargain pair of black patent Dior stilettos with silver tips at the front. Because, really? When in my life am I going to wear 5" stilettos? Chasing my kids around the sandbox?

So it was done. I thought. And then she said doesn't wear flats. Like, ever. Not even to the grocery store.

I suggested she make an exception. For these spectacular boots.

So I tried them on, to show her how nice they looked. And then I was all, "Look. If you don't get them, I will. One of us has to buy these."

(See how hard I tried not to buy another pair of boots?)

And then the salesperson said I could avoid tax (and trying to figure out how to get the items in my carry on) if they shipped them. So I did.

And then we met up with my friends and told them about the boots! They immediately wanted to see them, and the store of magical bargains, which was maybe three doors down from the bar.

I was like, "Hey, we're back! I just wanted to show my friends my boots."

They were delighted. They pulled them right out.

One of them said, "I'm so glad you got them. I was going to cry if one of you didn't buy these."
Posted by Lemon Gloria on Wednesday, December 02, 2015

Email ThisBlogThis!Share to TwitterShare to FacebookShare to Pinterest
Labels: clothing and shoes, friends