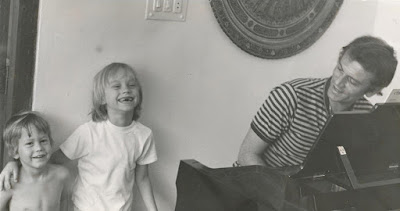 Ten years ago today was a spectacularly beautiful day.

I walked to work, six months pregnant. I admired the azaleas along the way. There's a particular shape and shade of pink azalea that is my favorite, but in truth, I love them all.

The sky was an inviting blue, the sun was shining, and there was just enough humidity in the air to carry the scent of the flowers growing riotously and delightedly.

It was the kind of day DC doesn't get very often--actual spring, beautiful, sun-kissed spring, warm enough to walk without a sweater, warm enough to sit outside, cool enough not to sweat.

Sunny but not yet hot in the way that makes your glasses steam when you leave the house, makes you lose patience with tourists on the metro, makes you collapse on the couch when you get home, repeating, for the millionth time, "It's not the heat; it's the humidity."

It was glorious outside, ten years ago today.

And right about noon, the phone rang, and I saw my parents' phone number on my work phone.

I knew. I knew, and I started to cry before I answered.

I knew he was really gone this time.

And I thought, "But it's too beautiful a day to die."

We still called the police, and the hospitals, and hotels. We did everything we always did. And then we waited.

We hadn't implanted a secret tracking device in him, which I don't know is even possible outside the Matrix and anyway would probably be illegal.

I don't know if you've ever waited, pretty completely totally sure someone was dead, but hoping to hell you were wrong.

I don't know if you've every desperately wanted to do something to fix a problem, but been entirely powerless to effect change.

If not, it feels as wretched as you might imagine.

But not as terrible as knowing you were right.

I learned when Pat died that the time of death is called when the official comes to collect the body.

Even if you know the exact moment the last breath left the body, that's not the official time of death.

And so I know that on my dad's death certificate, DC says he died at a particular time on Saturday, May 16, 2009.

They did an autopsy to figure out what killed him first, but they weren't looking for precise time of death. It wasn't murder.

Which, incidentally, was another incredibly beautiful spring day.

Another day that was too beautiful a day to die.

It was ten years ago today.