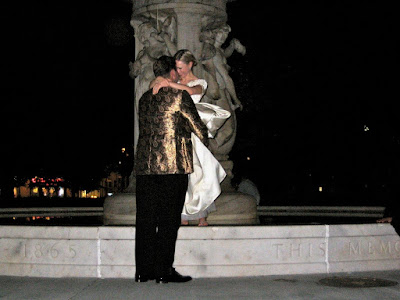 And then on Wednesday we both forgot, and yesterday we exchanged happy anniversaries. And this morning we almost forgot, except that you'd put it into Outlook.

Which is not to say it's not a milestone or unimportant.

Tonight we're celebrating with me going to a 5th grade parent social and you feeding the kids dinner and putting them to bed.

I can't believe we have a kid in 5th grade. It's the age I was when we moved to the States. It's simultaneously so old and so young.

I can't imagine why I ever objected to your gold jacket. I love that jacket.

Why was I so uptight?

When I stopped to think about which year it was, I was going to say 10, but then I remembered that in fact we got married in 2008 and so this would be 11.

We talked about this last night and I said that we just need to add a year to whatever age Jordan is and that's how many years we've been married.

This year marked 10 years since, in chronological order: my dad died; we bought our house; and our son was born.

You started rowing a year and a half ago. Now you get up at 4:30 every morning and head off to practice.

I knew you were an athlete growing up, and I knew, as a team sport person and an extrovert, that you needed a team.

You and I are so different in this way. I want to exercise alone, in my own head.

But team sports are fairly hard to find as an adult, particularly as one who has no time. It turns out 5:00 am is a perfect time for you, and for you, rowing is a perfect sport.

You're so much happier, fitter, and kinder now that you exercise every day.

And you'll be rowing in the Head of the Charles in October. I wish we could be there to see. I'm so proud of you and all the work you've put in to improve to this point.

When I was thinking about this past year, one of the things that struck me was that we're arguing less, and talking more.

We've gotten better at voicing what we hear, and listening to each other without telling the other person they're wrong.

Because you're never wrong about how you feel, or what you think you heard, even if what you heard wasn't what the other person intended.

I also think we're both less emotionally burdened by traumas in our respective childhoods.

Also, you've stopped using "Lisa's anxiety" as a way to explain or dismiss things. I appreciate this, because it always made my head melt and then nothing went well after that.

At this point, I can't even remember whose indictment you asked me to Google. But I spelled it "endeightment" and came up with nothing.

And then you asked me how I'd spelled indictment. And then you laughed, but not unkindly. And I had to laugh too.

But at the time I was also kind of like, look, I'm not a lawyer and it's not like I read or spell indictment every day. (I mean, OK, maybe now I do. But at that point I'd never spelled it in my life.)

And do you know that I always thought albeit was pronounced Al-bait?

So I've pretty much stopped doing so publicly.
I guess what I'm saying is, I feel like you grew a lot in the past year. Maybe I did, too.

I'd marry you tomorrow all over again.