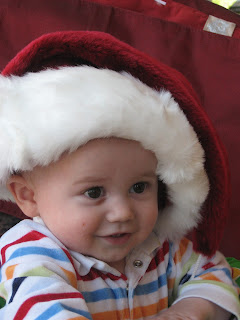 This year we got the best present ever. My brother and his wife had a baby, and he is the cutest, drooliest, happiest, loveliest little Hobbit on the planet. We are all vying for his attention.

"Give him some time!"

They announced one day that he weighed 16 pounds! This is what our dog Gloria used to weigh.

And so, as Betty was oohing and ahing over him, I said, "Hey Zach, you know, when Gloria was your size, she could do all kinds of stuff. She could sit, she could shake hands...she could even speak. In two languages!"

None of them appreciated the comparisons.

But really, I'm crazy in love with him. He smiles! He laughs! He's charming! And this is his first Christmas!

Merry Christmas everyone!
Posted by Lemon Gloria on Monday, December 25, 2006