Darling, Peel Me a Grape 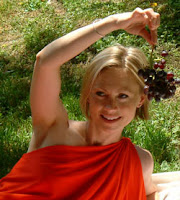 I got a call last night saying that they'd like me to be in the film!

You all know the title of this post is a joke, because the woman who not only shops for jeans at Costco but will try them on in the middle of a Costco aisle is not ever going to be a high maintenance diva.

These films are 4-7 minutes in length, and they show them in groups. Ours will be screened at 7 pm on Tuesday, May 8 at the AFI Silver Spring, and for anyone who is interested, tickets are on sale now.

What this means in terms of my part, nobody knows. Because they won't even be able to start writing a script till tomorrow night. It could be that I wind up with one line. It could be that I have one line and it gets edited out on Sunday. But even so, I'm so excited to be involved in such a fun project!

All I know is that at 7 am Saturday I have to be on location. With a variety of outfits and shoes in tow, just in case. Because depending on the genre they are given, this could be a western, could be a mockumentary, a drama, a comedy.

I love the randomness. I love surprises.

Let me qualify that. I love good surprises. I'm kind of tired of bad surprises.

In terms of news on my dad, my brother just called. They are taking the feeding tube out of his nose and connecting it to his stomach. Apparently the irritation down his throat is keeping it from healing. So it's a big part of the reason he still can't swallow.

It looks, however, like there's no permanent damage. Hopefully within 3-5 weeks he'll be physically healed and out of the hospital.

His brain, however, very sharp. He explained everything that was going on with him medically to my brother this morning.

The man sharing a room with my dad only speaks Spanish. They have a curtain dividing the room. So you can still hear everything going on. When the doctors and nurses need to speak with him, they get a translator.

Now, my dad's Spanish is fluent. So a couple days ago I said to him, "If you could talk, you could totally translate for that guy."

He paused for a moment to think about it. "Because he's crazy."