When Tequila Happens to Good People 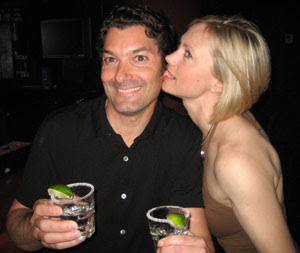 Last Tuesday night, after the film screening, I went out with the crew from our film. I will be seeing all of them again this Wednesday, and I am so excited!

I learned so many random things from this film experience.

Once you've spent that many hours straight with people you've just met, people you would not have met otherwise, but need to work well with to meet a goal, something interesting happens.

Having bonded under intensely creative and exhausting circumstances, you begin to feel like you've known these people for ages.

In your down time, you've talked about your families, your relationships, your aspirations, your bizarre experiences. You've drunk more coffee and eaten more snacks than you ever believed possible when not premenstrual.

You've lent someone your sports bra and you've worn other people's sweatshirts in the freezing rain and shared blankets on the couch. You've had what you thought were private conversations, which turned out to be on microphone. You haven't shared toothbrushes, but that would probably happen given another day or two.

You realize that people who are drawn to this type of project are people whose emotions live pretty close to the surface. Who don't put up a whole lot of walls. Who are interested in delving into the lives of others.

And, for those appearing on screen, who like attention. Who never shy away from the camera. I mean, except me, of course. Ha.

So then you take this group and put them in a bar at a post-film party. You add alcohol to a this very interesting conglomeration of people. And it's not that anyone's personality changes. They just become more so.

And then you know how at some point, like, once enough beer has been quaffed and it gets late enough, tequila shots can seem like a really good idea?

Well, at that point, someone like me for example, might feel totally comfortable posing for a picture nibbling the ear of one of the actors - Jason, pictured here. A guy who I'd never have talked to in a bar, much less nibbled the ear of, because I'd have assumed he was too good looking to be nice or interesting. Because he is model gorgeous. Probably because he used to model.

But what I learned over the course of the film is that Jason's not just a pretty face or gym perfect body. He's really bright, articulate, witty. Easy to talk and joke with. Like, an all-around cool person. Someone I feel lucky to know.

And so. After the ear nibbling, you go on to do tequila shots. You pose, step by step in the shot process. You know, so it can be well documented.

Because, um? Because you both have cameras and the idea amuses you both greatly. Seriously. We have probably five step-by-step photos. The cheers. The salt. The shot. The limes. The recovery.

So you go on with your super fun night. And then you see the photos the next day. And your last lesson of the night comes to you.

Tequila sure can take the pretty out of anyone. 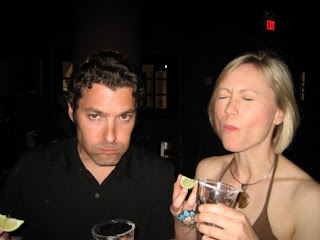