Because if you can't be "yay, me!" on your birthday, when can you, really? 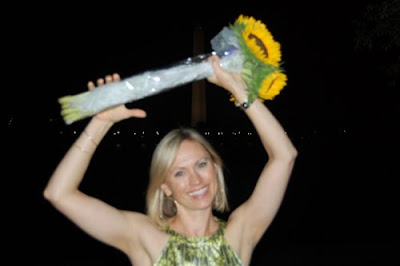 Thank you all so much for the lovely messages! You are all amazing, and you helped to make this one a great birthday!

I got cards and calls and emails and the best comments. I got a charming round amber vase full of orange Gerber daisies from lovely Jen, who now lives in Macedonia and appreciates orange at least as much as I do. Another friend gave me a Turkey travel book. Perfect!

And at the end of the day Nick and a couple old friends took me out for wine and delicious dinner at Proof. It's my favorite wine bar, by far.

For my birthday, Nick gave me a fabulous camera. It's digital, with a big lens, and can do all kinds of things that I have yet to learn. He was so excited about it he gave it to me two days early. He just couldn't stand the waiting. And he showed up with it in hand, so we could get some practice.

Nick spent the evening taking pictures of everything and everyone. All of us, our server, a wine glass...We invited a guy who was clearly waiting for someone to join us while he waited, but he poliately declined. So we offered to take his picture. Which he also declined.

On the way home, we stopped at the FDR Memorial. It's where we got engaged in February. Last night's weather was just so beautiful - much gentler and inviting of tarrying than that cold, clear winter night. Which, come to think of it, I don't think I've written about.

So I stood in the spot where he proposed. I know you can't really see the Washington Monument in the background, but it's there. And I raised my birthday sunflowers high. Victory! Yay, me!

There were a surprising number of people touristing and strolling for as late as it was. We accosted a couple walking by and asked them to take our picture. It was near midnight, and I'm pretty sure they were heading down to the enjoy the romance of the monuments shining on the water, but they kindly stopped and obliged.

And then Nick was all, "Here, do you want us to take a picture of you?"

Which they most definitely didn't.

You can't take him anywhere. Even in the dark.
Posted by Lemon Gloria on Thursday, August 14, 2008

Email ThisBlogThis!Share to TwitterShare to FacebookShare to Pinterest
Labels: dating and relationships, friends