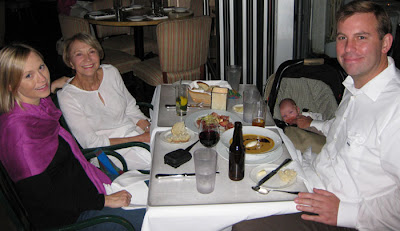 Yesterday was Betty's birthday, and we took her to Cashion's to celebrate.

And in fact, we were celebrating several things. Her birthday, Jordan's two-weeks, my two-week checkup, our first outing as a family.

Betty started out her birthday babysitting, while mama went to the OB. I thought she should do something more fun for her birthday, but she is so in love with our boy, she was just happy to spend the time.

And Jordan is all kinds of happy hanging out with her.

I seriously just handed the kid to Betty and sauntered out to the car, and Nick dropped me on his way to work.

Particularly on the heels of Tuesday, which was a massive cryfest. Me much more than the boy.

So at my two-week check, my OB - who as it turned out canceled his afternoon appointments to come to the hospital to do my C-section, and did a spectacular job - said my scar is healing well. And - life-changing news! - I can start driving again!

I had a momentary urge to kiss him when he offered up this bit of freedom. I hate hate hate being stuck, and stuck is exactly how I'd been feeling.

But just as I didn't force him to pinky-swear while I was still preg, I refrained from kissing him. Really would've made things awkward, you know?

And then I took a walk in the sun after the appointment. I went to Hello Cupcake and bought Betty a four-pack. I think their lemon ones are the best.

A morning of time with adults and air and sunshine temporarily changed my life.

And then Nick came home, and Betty and I got ourselves ready, semi-clean and only slightly peed on, and headed out for dinner. As a family. It was delicious in so many ways.

As it turned out, we all had a really good Betty birthday.
Posted by Lemon Gloria on Thursday, September 03, 2009

Email ThisBlogThis!Share to TwitterShare to FacebookShare to Pinterest
Labels: family stories, the boy