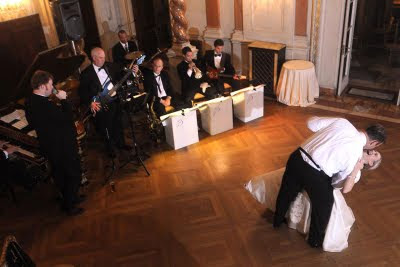 We got engaged after only knowing each other - and I mean from very first laying eyes on each other - for about 10 weeks.

When you think about it, it could've been a very bad situation.

But neither of us wound up being an axe murderer, and actually, as we got to know each other, we found that the things we had initially believed about each other and our characters were absolutely true.

I absolutely adored our wedding. And I feel so lucky that my dad got to see me get married. He loved Nick, and I know it made him feel good to know that I was with someone who loves me for me, completely and absolutely.

Hell, it makes me feel good.

People say the first year is the hardest. And it was, boy was it, but that had nothing to do with our marriage.

Truthfully, I don't know how I would've survived this year without Nick.

I was thinking the other day about how happy I am to be with him, and how I couldn't imagine being married to anyone else.

So I said this. Well, I thought I did.

What I said was, "You know, I can't think of a single other person I'd rather be married to."

Turns out, doesn't exactly have the same effect.

He gave me a look and said, "That's probably for the best, you know."

I'm so happy to be married to you. Happy anniversary, Nick.
Posted by Lemon Gloria on Sunday, September 27, 2009

Email ThisBlogThis!Share to TwitterShare to FacebookShare to Pinterest
Labels: love and happiness