One month: being so many different sizes in a day is very confusing. 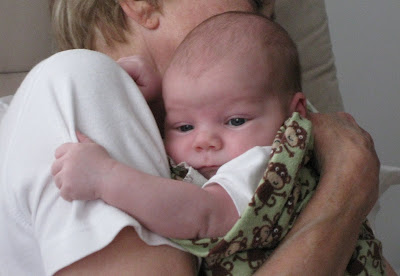 Saturday marked a month since Jordan was born.

We made it! A month!

We've all grown immensely in this time.

Jordan, he's a lot more awakey and present now. Instead of eating and falling right asleep, he spends a lot more looking at us, looking around, taking in the world. We look at him, and we think he's just the most beautiful thing we've ever seen.

How did we manage to make this perfect little human?

But getting to the point where we can step back and sigh with relief and happiness once in a while has taken some time and struggle.

Nick, in the beginning, Nick pretty much thought I was on vacation.

I knew he did, and it gave me this constant, bubbling below the surface, rage towards him.

Our second day home from the hospital, he looked around the bedroom, which was a complete chaotic mess. And being super tidy, I could see him getting more and more agitated.

I was lying in bed, still on pain meds - less than a week post-surgery - and I knew, I just knew what was coming. I was all, "That asshole is going to ask me to clean up."

And his very next words were, "Do you think tomorrow you and Betty could tidy up?"

To say I lost my shit would be an understatement.

But in his eyes, he was staying up with the boy and me, and then getting up in the morning and working 10-12 hours, and then coming home and working on the house and diving in again.

He was working really hard, with no break.

Where as I, in his mind, could sleep during the day.

We were just past week two that it really hit home for him how hard this was, and that I was in crisis.

He came into the kitchen with the boy - whose mouth was wide open, ready to eat, as usual - to find me sobbing into sink. I'm not kidding. There I was, soapy breast pump in hand, bent over, sobbing dejectedly into the crook of my arm.

And I did. In that period, I hated my entire life.

Tori was in town, and Nick sent me out into the sun with her. He'd take the boy, and I should do whatever I wanted.

I was, at this point, on my pump or feed every two hours schedule, but that is a whole nother story. But even so, this bit of freedom helped a great deal. Although I was still in the never-want-to-go-home place.

And when I returned home, I napped. I didn't rush to feed the boy, or to help at all. I left Nick and the boy to their own devices.

Because I just couldn't deal.

And for Nick, a whole day with Jordan made him realize just how demanding an infant is. And how actually, you don't really have time to sleep. Or pee. Or eat. Or do much of anything except meet! the! baby's! needs!

This changed his perspective and his behavior entirely. He returned to the super-supportive person I married.

I reached out for help, both mentally and physically. Thank God. It made all the difference.

Nick started doing more and more with Jordan, recognizing that while he does have a full-time job and he doesn't get a break, I don't really either.

Gramma Betty is happy to spend as much time as we want or need with him. I just had to ask. And I hated to ask and inconvenience her. And she didn't want to intrude.

So now, at one month, even though it sometimes still feels like we're living in a war zone, struggling for survival, those days are fewer and farther between. We're all much more used to each other, and we've almost gotten into a rhythm.

At a month, I think our Jordan knows that he is so very loved. He is more at ease, and less freaked out about the world.

But still rightfully suspicious of technology. 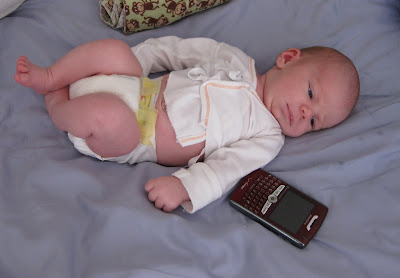