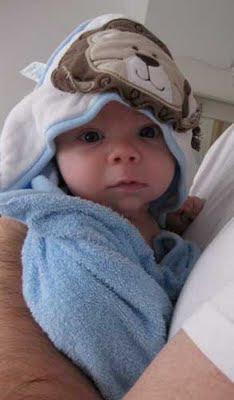 I called Nick last night a little or maybe very frantic. It was half an hour after he'd said he'd be home.

"He just had a two person poo. I need help."

Nick has experienced the crisis of the two-person poo before. He jumped in a cab.

For those of you unfamiliar with the baby poo business, let me tell you. You start out with what seems like a poo every 15 minutes. This frequency gradually reduces to once a day or once every two days. Apparently even every five is normal.

This, this I cannot imagine.

Because the second day poo is just extraordinary. I've come to dread the magnitude of it.

Last night, I knew he was pooing. He was sitting in his bouncy chair, which he loves, minus the bounce, and I could see it on his face.

So I picked him up to take him downstairs and change him. At which point I noticed the poo seeping through two layers of clothing.

I dangled him straight out in front of me, in an effort to avoid donning the yellow-brown fecal decoration that was fast spreading on his outfit. I figured one of us covered in poo was enough.

It was a poosplosion, up the front and up the back.

I'd dealt with one or the other before, but not both at once. The up the front kind took me very by surprise the first time. You have to clean poo off not only his balls, but all the way up above and around his little wing wang.

This, though, this was a poo of epic proportions.

Up to his belly button. Way up to the middle of his back. All over his clothes. He got his hand in some on the edge of his onesie while I was getting his pants off. And while I tried, it turned out there was no way to get it over his head without smearing some additional poo on him.

In a Clark Kentish move, Nick swooped in just in time to give the kid a bath.

Because there are not enough wipes in the world for poos like these.
Posted by Lemon Gloria on Wednesday, October 28, 2009

Email ThisBlogThis!Share to TwitterShare to FacebookShare to Pinterest
Labels: oh poo, the boy