Maybe if I were the Georgia O'Keefe of vegetables. And here we are at 17 weeks. With news! 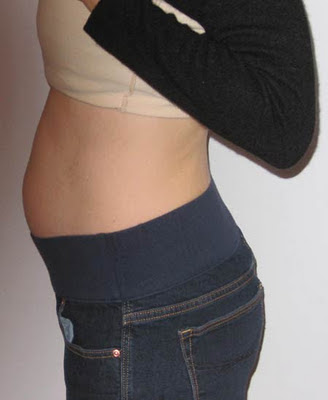 This week the kid is the size of a turnip. And if I wasn't willing to draw an avocado with toenails, I'm damn sure not drawing this one out.

So we had the amnio and we were supposed to get early results in 48-72 hours.

The genetic counselor we met with was very nice. When she called the following week she said, "The preliminary results look good. No Downs, no Trisomy 13 or 18. [Thank God] And it's a girl. [What?] BUT..."

BUT is not what you want to hear in this circumstance. I sucked in my breath.

Turned out it wasn't a punch in the face but. It was this kind of but:

"But they got some maternal cells in with the sample."

"What does this mean?"

"It means that at this point, they can't be certain that these are the results from the fetal cells. The odds are that they are, but..."

"In other words, it could be a healthy girl..."

So we had to wait for the culture to grow for 10-14 days. Apparently they feed those little suckers something that only promotes the growth of the fetal cells. So they really really know by the end.

And then the cells were slow growing. Which I took as a very bad sign. Slow growing? Slow? They assured me this had nothing to do with the cells. It could just be lab conditions.

Nick called for updates twice a day. Just to see if they'd gotten results. He was very polite. Just, you know, persistent.

I am sure they were sick of him. He was fine with this. He wanted them to be tired of him to the point where they'd give us results the minute they had them just to stop the calls.

This is not something I can do. But I am so grateful he can.

He said, "I don't care if I annoy them. We're paying them a lot of money - and it's not like we're going to invite them to dinner next week and it's going to be so awkward."

And they called - the minute the lab reported the results. In fact, the genetic counselor spoke with the head of the lab to get his assurances that there were no concerns about maternal cells.

It's a GIRL! A little vagina-having turnip!

And she doesn't have Downs, Trisomy 13 or 18, or any of a host of other potential genetic things they test for!

Email ThisBlogThis!Share to TwitterShare to FacebookShare to Pinterest
Labels: the baby chase