All the dishes rattle in the cupboards when the elephants arrive 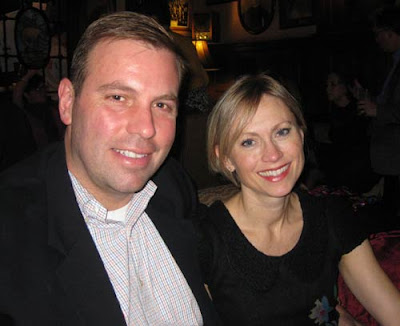 I must mention, because a friend asked, that this is a NOW picture, not a THEN picture. Although it made me think how funny it would be if I had whipped out a camera to document each first date.

Awkward, no? Plus, I'd need an extra hard drive just to store them all.

So, I wanted a picture that showed us and showed the couch and the room so it included some atmosphere. But Nick chose to ask a couple sitting like 15 inches from us to take a picture. And so we loom LARGE in the photo.

(And no, I'm not sure why I'm hell-bent on capitalizing shit today.)

And also: I have to show you what I wore. I love this dress. I got it in Paris and it is A-line and knit and accommodating and I can still wear it and it has such cute flowers and embroidered collar and sleeves and did I tell you I love it? 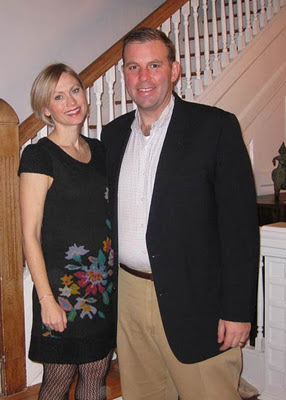 I love the anniversary of our meeting more than our wedding anniversary.

And not just because the service at the Tabard is so much kinder and friendlier than our wedding venue. Even though the place is spectacular and I do feel very fortunate that Nick's father is so into genealogy and found an illustrious dead ancestor (are ancestors necessarily dead? I think so) so that he could belong to this particular society and Nick therefore could belong, which ultimately resulted in us getting married at an affordable and spectacular venue.

But also at the Tabard they let you drink red wine and set things on tables and aren't all pursed-lipped and unhelpfully rulesy, thus making you want to spray urine in their corners.

Which I would of course never do. Of course.

So they do have a couple things up on the wedding venue. Plus I don't suppose anyone actually celebrates their anniversary precisely where they had their wedding.

God, I can speculate about useless crap, can't I?

I think the main reason I like our first date anniversary is that first dates are so fraught.

By the time our wedding happened, there was no uncertainty left. Walking into a first date? No certainty whatsoever. When I started doing all the Internet dating, I was excited about first dates. Honestly.

And as you know, by the time I met Nick, I canceled our first first date, because I had already had so many that not only had all the excitement been squozen out of me, but I was tired and jaded and fully prepared to loathe him by halfway through the first glass of wine.

I write about this every year, so I won't bore you with the rhapsodizing or the oh-thank-Godding on luck turning my way again this year.

But...I still feel lucky, so very lucky. And not only because meeting Nick meant I never had to die alone again.

So far, of course. I suppose he could always get hit by a bus.