Birth announcements, the battle of the cold pants, and various and sundry updates 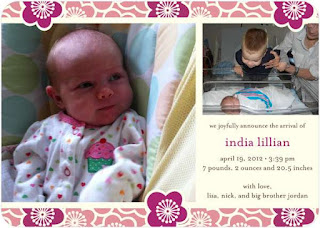 Birth Announcements:
I'm inordinately proud of myself for getting a birth announcement put together. I didn't manage it for Jordan, and though I had good intentions and a nice family photo, I never made the damn Christmas cards. So I was determined to make India cards.

I know for many people this is perhaps not a feat...but I come from a long line of no-card-sender-outers. And I did it!

Cold Pants:
It is 90+ degrees in DC right now. It is hot as balls. And my son insists on wearing his cold pants.

And if you haven't read the cold pants post, then let me tell you that by cold pants I do of course mean lined nylon track pants. The kind that do not breathe. There's nothing cold about them in this heat. And still, he will. not. wear. shorts.

Or even nice cool cotton pants. No no no. To the point of sobbing hysteria.

We still only have two acceptable pairs. Because the kind we bought on eBay weren't exaaaaaactly the same. Like a socialite spotting an excellent fake Hermes bag, he turned up his nose at the would-be cold pants.

Actually, he didn't turn up his nose. He kicked and screamed. We would not be donning those imposters!

He and Nick had a huge drama-trauma scene the other morning because both pairs of cold pants were dirty. Like, too dirty to just put on him and pretend they were clean. He finally deigned to wear a pair of brown sweatpants with an orange stripe up the side. Even though he has myriad more comfortable (as in, less sweltering) options.

I wasn't exaggerating when I said she eats all the time. She wakes up and she wants to eat!  Nownownow! And the girl has lungs on her! She is not to be ignored!

I really wish breasts weren't so sexualized in the US. I would like to be able to whip out my boob and nurse without having to squeeze it through random flaps in these confusing nursing shirts and staying all covered with a blanket.

Working Out
Or, uh, not.

Since India's birth, I've gone out walking a few times, but nothing more strenuous than that. There re many, many days where I just sit. All day long.

And here's what I find disturbing: it's appallingly easy for me to just not exercise.

There are moments where I think I'd like to go for a nice run...And then it's about time to nurse again, or it will be shortly, so I walk to the kitchen and pour a glass of water and make myself a nice cup of tea and pair it with a bowlful of M&Ms and/or Cheez-Its and settle into the big red chair.

And another day goes by. It's that easy. Usually I get all twitchy when I don't exercise for a few days. I'm not a great sitter-arounder. So I find it rather disturbing that it bothers me not one bit, except mentally.

What, I wonder, if I just never have the urge to work out again? Eventually, I'm going to have to stop wearing maternity clothes...
Posted by Lemon Gloria on Tuesday, May 29, 2012

Email ThisBlogThis!Share to TwitterShare to FacebookShare to Pinterest
Labels: i'mamama, the boy, the post-pregnant, weight and body issues