I love our neighbors and waterboarding a baby will get you nowhere in terms of information and now I'd like a parenting award. 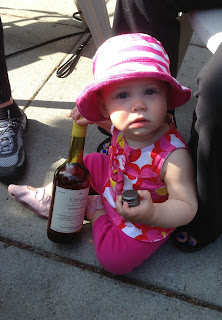 We have these down-the-street neighbors - two guys who live in the same building - who, when the weather is nice, like to pull a bistro table out to the curb.

I'm not sure which of them came up with the idea as a way to meet women, but it's quite remarkable - you sit in wrought-iron chairs at a wrought-iron table on the sidewalk, drinking wine and inviting passers-by to join you, and you meet an astounding number of people.

Did I mention that one of them is French, and always has an incredible assortment of wine? Well, he is, and does.

I think the first time Nick and I had really talked to either of them was one evening several years ago. We'd gone out front, probably to admire Nick's handiwork, and they waved us over.

As if it weren't enjoyable enough to sit and drink wine and have nice conversation on the sidewalk in front of one's house, there's also the parking judging that they like to do.

Because, you know, parallel parking in tight city spots is not always so easy, and our neighborhood is terrible for the parking. If you've tried to squeeze into a space - with or without the bump-bump - you know that it sometimes takes more than one attempt. And then if you have people actively and obviously judging you while you're doing it, and then giving you scores for your parking job, it makes it all the less easy.

But highly entertaining for those on the sidelines.

I think the night we met we had, oh, five or twenty glasses of various French alcohols and then it was midnight and we realized our baby would have us up in six hours and we were going to feel like the ass of death the next day, which is precisely what happened.

But anyway, that's how we got to know both of these fine fellows in the first place. And now we've been all neighborly for the past several years.

So this Saturday, oh, Saturday was a gorgeous, sunny, breezy dessert of a day. Perfect for being outside.

We stopped and said hello as India and I embarked on a walk around the block. And when we got almost back to our house, I realized she'd taken off and discarded a shoe.

She and I stopped at the bistro table, which at that point in time had three men, and I showed them the shod foot and asked if they'd seen an itty bitty pink and white shoe that matched.

They, the wine swillers, took it upon themselves to ask extremely helpful questions.

"India! What did you do with your shoe?"

No, as you might imagine, answer. Just happy smiles.

And then one of them said, "I hope you don't have to waterboard her to get an answer."

Which, thankfully, I didn't. Instead, we walked around the block two more times, and there it was, perched on a wall.

And then she had a nap and when she woke up, they were still there, plus a couple other neighbors, and we joined them for a glass.

I seriously love our neighborhood.
Posted by Lemon Gloria on Monday, April 29, 2013

Email ThisBlogThis!Share to TwitterShare to FacebookShare to Pinterest
Labels: India, life in DC