My mama told me when I was young we are all born superstars. 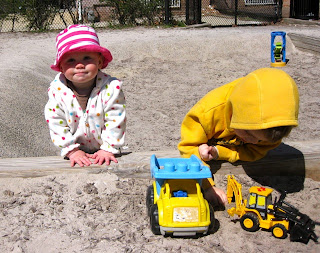 When I was a kid, my dad used to make me go talk to strangers.

I know - opposite of what everyone else was being told, right? I mean, he was there, and he wasn't all, "Hey, go see if some man in an unmarked van has candy!"

It was more like he'd send me over to the desk at a hotel to ask where the restaurant was. Or whatever. Just to try to make me more comfortable talking to strangers.

I hated it. My younger brother would always step in for me.

Now, although I don't go out of my way to do so, I'm fine talking to people I don't know. Like, I don't shy away from an information desk or asking strangers for directions or something.


But what having kids has made me realize is that people are pretty much born with their personalities.

Look at these little humans: India is always all, oh, hey there! Hi! And Jordan is perpetually so busy creating his own little world.

Jordan, he hangs back in a crowd of strangers, sits on the edge sucking his thumb, not jumping in until he's comfortable.

Sometimes he doesn't talk at all in a group of new kids. He finds some trucks or a book or something that interests him and sits there absorbed, like there aren't 15 children running in circles screeching and playing.

I have to resist the urge to push him into the fray, to say, "Go play!"

And he is so me in this way. The bulk of humanity is not of great interest to him, and a large crowd of strangers is overwhelming. He picks his people. His true people are few and far between, but you can see how intensely they spark each other when they're together.

India, on the other hand, arrives and she's all, "Hey! I'm here! So great to see you, whoever you are! Yippee!"

This is Nick. Whenever we are in a social situation where we know almost nobody, I hold on to his arm, stand slightly behind him. Which, practically speaking, given our size difference, makes me invisible.

Whereas he's just like, "New people to talk to! This is great!"

And then he'll just start talking to some random person about, I don't know, anything. There he is, striking up a conversation on the weather or dominoes or foreign policy or ball point pens.

Seriously. Whatever. He just starts talking.

Sometimes he talks too much, and I want to pinch him. Sometimes I do.

So here we all are, in a social sandbox. Some of us are mentally scooping wood chips with a backhoe, and some of us are poised to catch someone's eye all, "Hello the people!"
Posted by Lemon Gloria on Wednesday, April 03, 2013