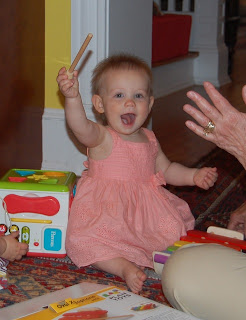 Today you turned one. ONE! Look what a big girl you are now!

It's hard to believe that a year has passed already. It's been a huge year.

This has been an exhausting, tragic, bizarre week. I'm so glad we had today to look forward to. Your birthday was really the only bright spot.

There were bombings at the Boston Marathon. People lost limbs; people died. One of them was only eight. Boston was on lockdown all day today. They finally have one of the bombing suspects - a 19 year old - in custody. His older brother died in a police shootout. An Elvis impersonator sent a poisoned letter to the president. The Senate voted against expanded background checks for guns; the NRA is more important to them than the lives of children.

It's the kind of week that makes you sad, tired, fearful for your children. What kind of world is this?

Your grandfather died on Wednesday. You are too young to have known him, even as the man in Daddy's chair. But still. You and Jordan had one, and now you have none. Nick had a dad, and now he does not.

I know he lived a long, good life, and I know it's the way of the world. But still. It makes me very sad.

But you, my love, you are a dollop of unadulterated joy. You are so shriekingly happy most of the time. You yell with glee when you see us. You beam, you raise your arms for us to lift you and adore you.

You've got three teeth, and a fourth is sure to appear any day now. You show your giant, gummy smile most of the time.

You're sleeping much better, although you still wake up fairly regularly at 3 am; on a good night you'll make it to 5:45, which is like magic. When you wake up, however, you do not go gentle into that good morning. No.

In fact, you scream at the top of your lungs as if you're terrified or in pain. The first time I heard it, I was certain something was gnawing your leg off. I rushed in to save you from...uh...the tragedy of being alone for 45 waking seconds.

See, here's the thing. You SCREEEEEEEAAAM! WAAAAAIIIILL! CRYYYYY! And then we stumble in, all shocked awake but not yet coordinated.

You see one of us and immediately you're all, "Hey! You're here, too! This is great!"

About a month ago you started talking steps, and now you walk pretty well when holding hands. Jordan loves to take your hands and walk you around. The only problem is that he doesn't quite recognize when you're faltering. So sometimes it's more of a drag you around.

You don't complain, though. You so genuinely and obviously just adore your brother. You want to be everywhere he is, in everything he is. You love his cars. This drives him pretty crazy.

When you're not driving him nuts, though, he thinks you're great. He refers to you as his baby. He loves to hang out in the bathroom when you have your bath, and chat with you while we put on your jammies. He will then very sweetly turn off the light and close the door for me to put you to bed.

I have to hand it to him. You sometimes do things that really upset him, like breaking his traffic, and still, he doesn't shove you over.

He'll get so angry, and raise his hand and say, "hit!" or hold out his arms and growl, "push!" But he doesn't actually hit or push.

Jordan was very excited to choose his own birthday present for you. It's a strange bunny kind of doll. He picked it. You LOVE it.

He proudly unwrapped it for you. Tah-da! 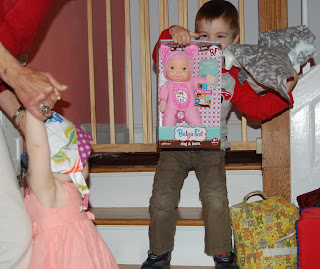 Here you are doing your wounded-soldier crawl, getting bizarro bunny baby to safety. 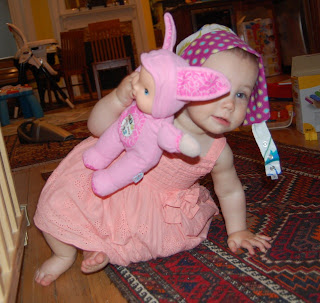 Bizarro bunny baby sings ABCs and such. I have this feeling we're going to hear a lot of her on the way to and from New Jersey. Her and Peter Pan and Captain Hook, unless your dad has downloaded more videos.

I'm going to be very excited when you sleep all the way through the night. But I'm going to be sad when you're no longer small enough to sit in my lap before sleep, resting your fluffy little head on my shoulder, your sticky-uppy hairs tickling my cheek.

India, my love, it's been a hell of a big year, and I'm excited to see what the next year brings. I love who you are, and I love who you're becoming. I feel so lucky to be your mom.

Email ThisBlogThis!Share to TwitterShare to FacebookShare to Pinterest
Labels: India, love and happiness