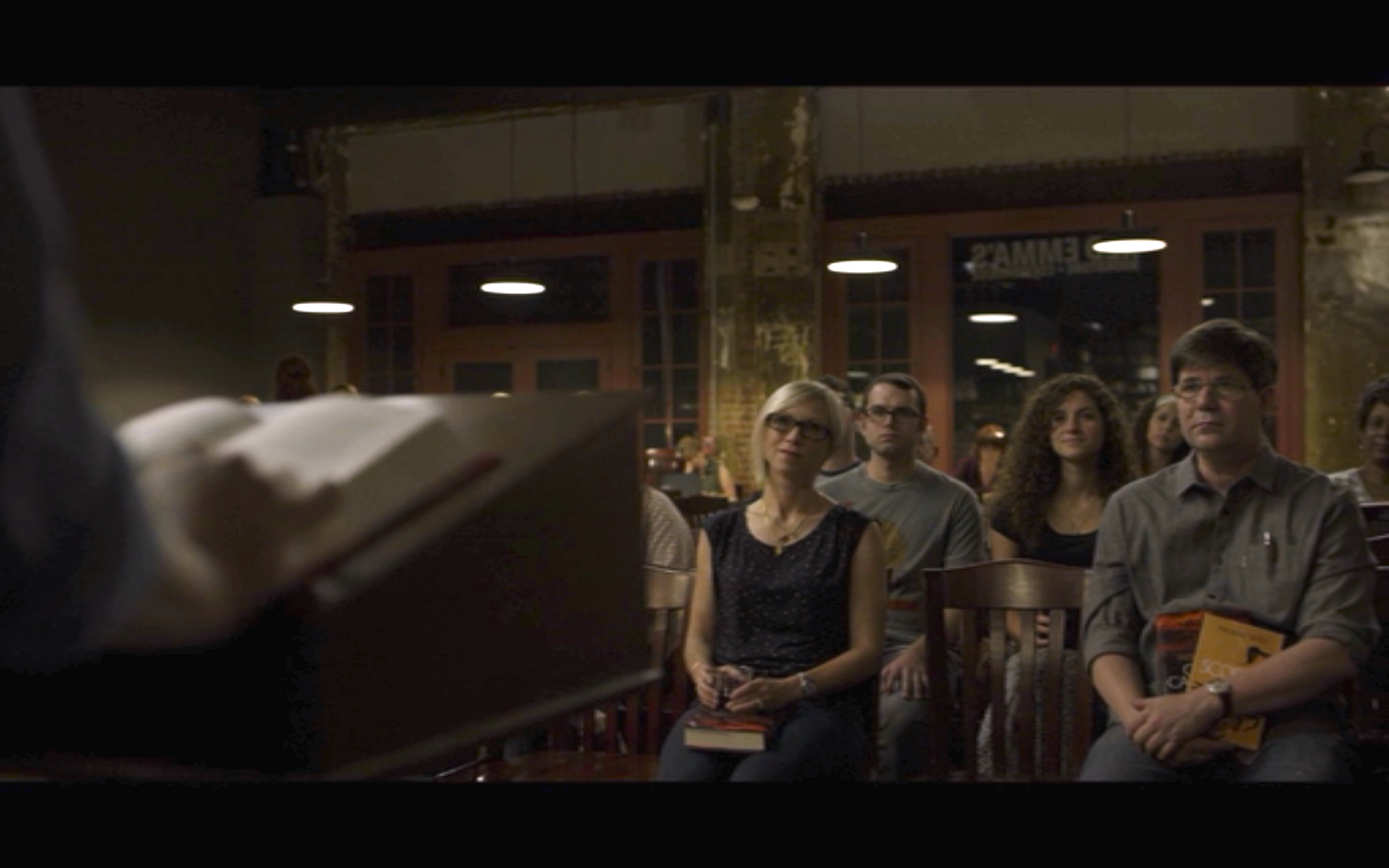 Oh, hey! I was an extra on House of Cards!

I told just about everyone, but I didn't blog about it because they were all, DO NOT blog, tweet, Facebook, Tumblr, carrier pigeon, etc. this or we will cut you! Really they just said you'd be banned from working on the show forever and ever.

I mean, you were allowed to mention that you were an extra, which I did. But I wasn't like, hey! Senate confirmation hearing! Claire! UN Ambassador! Book signing! Remy Danton! Unclear what he's up to! Heather Dunbar! Union rally! Running for president!

All of those were true but I didn't say any of them because I am a first-born-rule-follower and also for fear of being cut or banned.

But what I did say was that if even one of my elbows or ears makes it onto the screen, I am telling EVERYONE.

Last summer I saw a casting call for extras for the third season. They wanted DC-looking people.

We had just binge-watched every single episode of House of Cards even though I kept saying I was going to stop because each and every one of the characters was so evil and wretched. But I just couldn't quit them.

So I put on my black suit and headed off to the casting.

I ran into my neighbor Tracy who was all, "Oh, they won't pick you with your awesome asymmetrical hair. You're way too hip and fashionable to look like you're from DC."

I was all, "I am NOT hip or fashionable and I look totally DC!"

Apparently they agreed and I wound up in three scenes.

The first one is Claire's Senate confirmation hearing. My cousin and Nick both found my little blonde head in the audience seated way behind Claire.

I turn out to excel at audience-sitting. Basically, if you need an audience sitter, I'm your gal.

In the breaks it was so hard to pass Robin Wright in the hallway and not say things like, "That Vizzini, he can fuss!" They were dying to fall out of my mouth right after petting her arm and telling her how terrific she is.

I did none of those things. I just walked past the chair where she was going through her lines, and down the hall to the bathroom and pretended like it was all normal to pass a famous actor. Even though I so wanted to bow to the Queen of Slime, the Queen of Filth, the Queen of Putrescence...

The scene above was filmed at Red Emma's, a radical bookstore in Baltimore. The sections are entitled things like "Lesbian Anarchy" and "Organizing Atheists." I'm making these up, as I can't remember actual sections, but they're along those lines and I was thinking that the Underwoods would never set foot somewhere like that.

And in fact, they didn't. But I did get to stand in line for quite a while behind Remy Danton, who is a long tall drink of water.

Two of my friends, interestingly enough named Kristen and Kristin, both told me that they were watching HoC the other night with their respective husbands. Kristen, who I know in person but haven't seen in years, and who didn't know I was an extra, said she saw me and started yelling, "There's Lisa Jordan!!!" Her husband thought she was insane.

Kristin, who is one of my invisible Internet friends, saw it and started yelling, "I know her! That's my friend!"And her husband also questioned her sanity.

So I guess what I'm saying is, if your name is some variation of Kristen and you are watching HoC with your husband and you see me and you think it's cool, maybe don't jump up and down and yell, because he will think you are nuts.

Even if your enthusiasm makes me really happy.
Posted by Lemon Gloria on Wednesday, March 18, 2015

Email ThisBlogThis!Share to TwitterShare to FacebookShare to Pinterest
Labels: creativity, life in DC