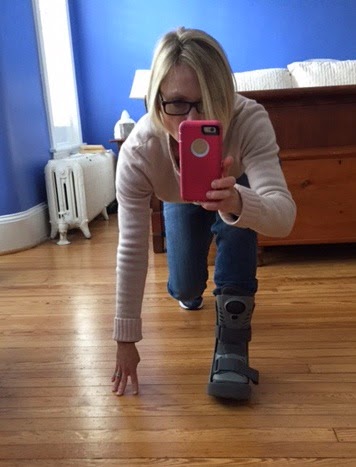 This may come as some surprise to you, but I rely on my speed a great deal.

This is chiefly because I do not excel at time management. So to be on time, I tend to wind up running at least part of the way to wherever it is I need to go.

And then I arrive all out of breath and sweaty and immediately need to remove a dramatic amount of clothing.

Nick knows. This is how I showed up for our first date. And he says, hand to God, that he looked at me in the Tabard's low light and said to himself, "Someday I'm going to marry that sweaty orange chick."

Basically, when I am walking, I have two speeds: Very fast. And stopped.

And then of course I run when I am late. That varies from a jog to all-out sprint. I have done this in a variety of footwear. It is not necessarily graceful.

I'm not one of these people who sees three seconds to go on the crosswalk and slows down thinking there's not enough time. No. I think, hey, if I run, I'll definitely make it. Obviously, having children has curbed this habit. (Curbed. Ha!)

Even in the boot, I clomp like the wind.

I wheel my son's scooter and helmet to school with me in the afternoon and I see people look at the scooter and then my boot and I want to be all, "This isn't mine. That's not how I got it."

Yah, so, I just saw my podiatrist. I was on time, like on the minute, but if I didn't have a hurty food I'd have been a few minutes early because I'd have run those last few blocks.

But then I suppose if I didn't have a hurty foot I wouldn't have to see him.

He asked how it was all going and I said my boot foot is doing great but my achilles on my other foot is sore. And that I've been worrying that when this foot is done, I'm going to have to just switch the boot to the other one.

And he said, "You take it easy when you're walking, right?"

The younger me would probably have totally lied, but I confessed that I walk really fast. Like, fast enough that people comment on it. Especially with the boot. They're all impressed.

I'm not saying it's Olympic-level boot walking, but I do think you'd agree.

(Also, if you feel like you need more attention, get a boot. In that regard, it's like having a puppy, but not as cute and nobody's trying to pet it.)

He said to slow it down. Take it easy. Smell the roses. Two or three more weeks.

I will try so very hard.

Email ThisBlogThis!Share to TwitterShare to FacebookShare to Pinterest
Labels: clothing and shoes, health and compulsions