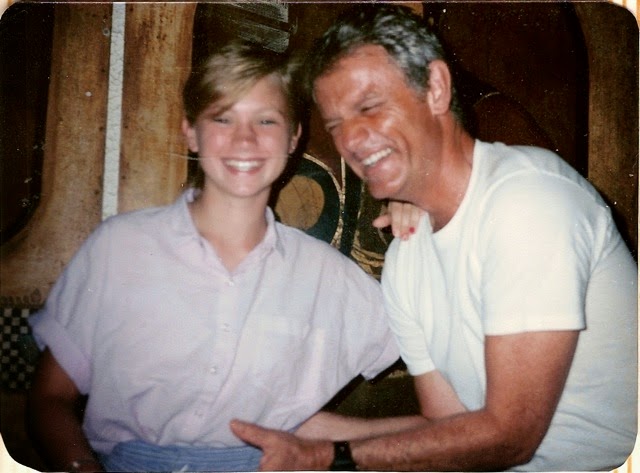 I remember watching the British Office with him. We both laughed until we weren't making any sound, until tears were rolling down our faces.

How often do we laugh like that? So rarely do I.

After my dad died, an old friend wrote that he remembered my dad's laugh, that he had a great laugh. I really appreciated him saying that.

Coming up on six years since his death, I've realized I've forgotten lots of things in my effort to gain some emotional distance, to not be so shattered. I understand that the forgetting, or anyway, diminishing in vividness, is helpful, part of time healing all wounds and such.

He hadn't had much of a sparkle, much of his humor, for a while before he died. But for a long time, he was hilarious.

I want to remember that he was funny.

My dad used to say shocking things and leave them hanging. He had a high tolerance for awkwardness, perhaps even an enjoyment of it. It was likely impossible to out-outrageous him; I never saw anyone try. Although in retrospect, why would you?

It's not a contest for normal people, I don't think. Whatever normal might be.

As it turns out, I inherited this ability/character flaw/behavior trait from him. I can't remember who pointed this out. Was it Maude? Probably.

I remember that I used to do this at parties, sometimes for attention. Sometimes if I was bored. Sometimes just to shut down a conversation.

Saying the extreme thing, I now understand, puts the other person off balance. Throwing people off balance is probably what my dad liked about it. And he was a performer. Am I a performer? I don't know.

It's not always deliberate, however. Sometimes it's more that things fall out of my mouth that don't fall out of other people's mouths, because they know how to keep them shut. Which is odd, because I learned in therapy that I can sit with awkward silence for quite some time.

Since I am able to sit silently despite the expectation of talking, you'd think I'd have the ability to just not say the weird thing and leave it awkwardly and silently flapping around in my brain. But no.

There are people who chit-chat when they get nervous, or if there is tension and a conversational void. And oddly enough, I can wait it out.

But then in therapy I'd remember that I was paying cash money to this person to help me sort out my shit, and waiting her out was counterproductive. Right?

The other day when I was complaining about the weather Nick said, "You know, April IS the cruelest month."

And I said, "My dad used to attempt suicide in April. So yah, tell me about it."

"Used to" is unfair. Twice isn't a used to. But it's still twice. And they were really bad ones. Not that there are good ones. But there are more and less terrible attempts, and these were on the very terrible end of the spectrum.

But that's not actually what this was meant to be about. Or maybe it sort of is?
Posted by Lemon Gloria on Wednesday, April 29, 2015