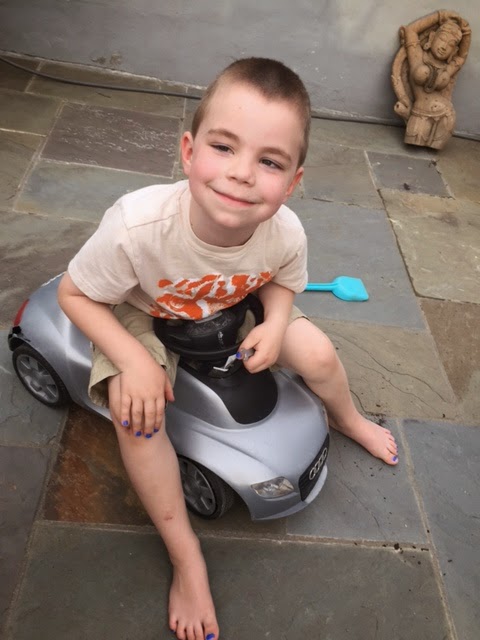 I didn't realize, until I had kids of my own, how scared I'd be of them getting hurt.

My rule for trees is that I won't help you. If you're big enough to climb it on your own, you can climb it. Yes, I make them hold the railing when they go down the stairs, and I'm vigilant about corners and when we cross streets.

But I try to give them room to test limits. Within non-deathy reason.

More than the physical, though, I've learned I'm so afraid of my boy having his feelings hurt.

And it's not like I can keep him from it, can I?

Not long ago Jordan told Nick, who had on a pink button-down shirt, that he was wearing a girl shirt. We said that actually, there are no boy or girl colors. But this is new for him, this "pink is for girls, blue is for boys" idea. My boy loves pink, but he's falling in line with what he hears from his peers.

So, about a week ago I painted my toenails blue. My kids, who don't miss anything, looked at my hands and said, "You colored your toenails!" They wanted color.

I hadn't painted my fingernails because I typically don't sit still long enough for them to dry nicely, and even if I do, I ruin them immediately. And also, if I'm being honest, I was afraid that then Jordan would want his nails painted.

When he was younger we'd painted his toenails, and some other little kids saw him barefoot on the soccer field and asked. But didn't tease. Just asked. But now he's older, and kids seem to be more unkind.

Does our capacity for meanness increase as we age? I think it must.

Both kids clamored for color. India wanted pink on one foot, orange on another, pink on one hand, blue on another. Jordan wanted blue on all nails. Feet and hands. (Blue is for boys, after all.) I painted India's first, then started with Jordan's toes.

Before I painted his fingernails I said, "Kids might tease you about this. They might say that only girls paint their nails."

"Because usually only girls paint their nails. And so I worry you will get teased, like how some kids say that boys shouldn't wear pink."

"You still want me to paint them?"

"What will you say to kids who say something to you?"

(Oh, how I used to try to be the same as everyone else! I regret the tremendous waste of time.)

But I was worried. What if he got teased so much he cried?

When I picked him up after school, he was in a great mood. He'd had a good day. We were malingering in the sun out front, and he was playing chase with a couple classmates, one girl said, "Is he a boy or a girl?"

"Then why does he paint his nails?"

"Because he likes color. He loves that blue."

That was pretty much where it ended.

On the way home I asked if anyone said anything about his nails, and he said one boy teased him, and he told him he wasn't trying to be just like everyone else.

So he handled it, and that seems to have been that.
Posted by Lemon Gloria on Monday, April 27, 2015