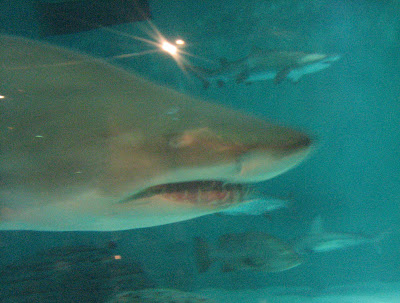 Ohhh was that aquarium event fantastic. I've been to some amazing events, like receptions at the Ambassador's residence in various countries and lawyer proms at fancy museums like the Corcoran, but this was one of the coolest I've ever been to.

When do you ever get to sip wine, snack, listen to live music and peer at sharks? And how did I not know before that I love watching sharks? I tried very hard to get a decent picture of the bitey teeth. They've got rows of them! 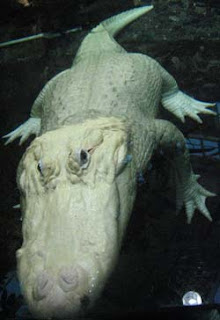 We wandered around, admiring the sharks, the turtles, the tropical fish, the beautifully colored, serenely floating jellyfish. There was a cute sea otter lounging on his back.

They had a couple furry skins on a table near the otter, and an empty tank, and I wondered aloud if the skins belonged to whatever used to be in the tank. And was hurriedly hushed. See? They should've stuck me in the shark tank.

It was simultaneously serene and lively. There was always something new and fascinating to look at. I took a lot of pictures, but all (obviously) through glass and without flash. So they're a little grainy and murky.

And the food. Grits and sausage and redfish and some kind of fantastic seafood pasta and a bunch of other stuff I didn't even try. And for dessert one of the options was bread pudding.

I kind of believe bread pudding is actually divine. Like, after God was done making the world, on the seventh day he rested. In the morning. Because in the afternoon he was busy making bread pudding. With whiskey sauce.

One of my favorites was the enormous albino alligator. Incidentally, I took pictures mainly for Lira. You know, because unlike me, he was an actual albino. I like this one with simultaneous above and below water views. 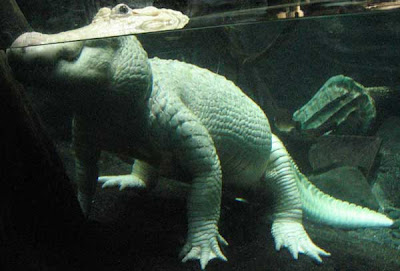 He was ginormous. I couldn't even guess how big. I looked him straight in the eye, with just a pane of (super thick) glass between us. And he just stood, very still, staring. Without blinking. In an, "I'll bite you, my pretty! You and your little dog, too!" kind of way.

Ooh, ooh, and I got to pet a baby nurse shark, and sting rays. I am so very tactile, and this was a delight. Shark feels like sandpaper, sting rays feel smooth and squooshy and soft all at the same time. The sting ray guy was telling us how the stingers are like fingernails, and so it doesn't hurt them to have them snipped. And they have to cut them and file them down on a regular schedule.

I asked if they're poisonous, and he said that the ones we got to pet aren't, but the problem with being stung by them is that the puncture wounds are deep. And so if the wound isn't cleaned immediately and really well, it can easily get infected because of whatever bacteria is on the rays. I love knowing stuff like that. I don't know why. 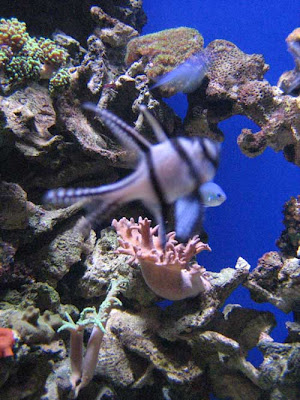 Toward the end of the event, when copious amounts of alcohol and fattening food had been consumed, it was down to a small group. People were talking about where to get drinks afterwards, on this, our last night. 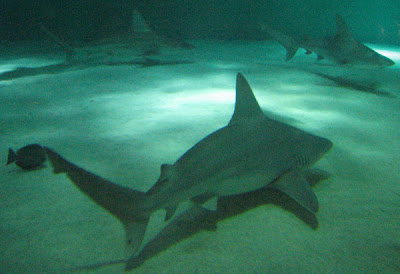 One of our meeting planners, who I have just recently gotten to know, and to whom I was earlier lamenting my lack of boyfriend, is 24 and just so cute and hilariously funny. It was the end of a long, long meeting. A meeting in which she'd had massive amounts of responsibility and had done a fantastic job. And was finally letting down her long blonde hair.

I said I was tired. And she turned to me, reached over, and pulled out the top of my purple tube dress, and said, "But you have to come out! You're so much fun! And you've got this kick-ass figure and hey, great breasts, by the way. Let's go out and find you men to flirt with!"

And then looked totally stunned. "I'm so sorry. That was totally inappropriate. I don't know why I just did that."

For me, that solidified my liking of her. It's the kind of inappropriate thing I have thankfully not done in a long time. It made me laugh loudly.

And that was the evening. We gorged, ogled fish, drank wine, and toasted the end of an exhaustingly long meeting.

I passed up one last chance to flirt with the men of New Orleans. Instead, I took my alleged kick-ass figure back to the hotel, packed, watched Entourage, and went to bed.
Posted by Lemon Gloria on Sunday, August 05, 2007