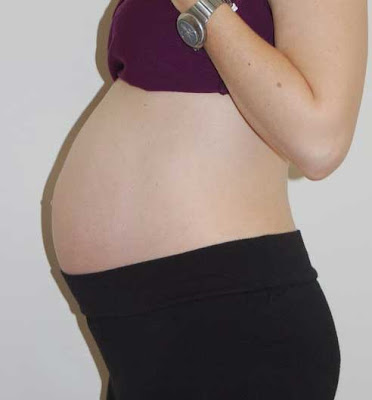 This past week he started kicking and flipping and just generally making his presence felt more more more.

He's still kind of uncooperative, and so when I'd say he was kicking and Maude or her mom would put a hand on my belly, he'd stop. I think also their hands are so nice and warm that he probably got all soothed.

One night we stayed up ridiculously late, and I was lying on my side on the couch. It's my sleep position, the one that makes him riverdance just as I'm starting to drowse. And so he was thump thump thumping away, and I told Maude, who hurried over, kneeled on the floor, and slid her hands flat under my tummy.

And sure enough, there he was, all dancy-pantsing on her hands. We just giggled.

This is how her mom stumbled across us, past midnight, all jet lagged, as she wandered past the living room to use the bathroom.

She didn't even blink.

Another thing that's happened is that my belly button is becoming less and less, well, belly buttonish. I'm terrified it's going to become an outie. You can see the hint of this in the top picture.

Nick is sure it is, and my horror of the idea delights him. So this morning said he was trying to get a good silhouette that showed the sticky-outy nature of what used to be my cute little innie.

And here I am trying to block this image.

Maude said hers never stuck out, just got to the point where it was pretty much flat.

"Basically," she said, "it looked like a cat asshole."

I'm pretty sure cat asshole is where I'm headed with this one as well.
Posted by Lemon Gloria on Friday, May 08, 2009