Here Mama, I'll hold it in for you! 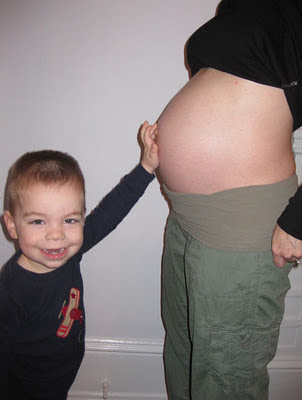 I'm definitely bigger this time, but while I could be wrong, I don't think I'm significantly bigger at this point than I was with Jordan, but one thing is certain: my belly button is firmly in what my friend Maude terms the "cat asshole" stage.

It got there fast. It's been there for a while. It grosses me out. 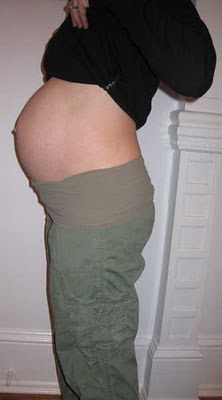 I'm not sure why I find it so much more horrifying than other icky pregnancy-related things, but I do.

So naturally, when anyone asks if my belly button is poking out yet, I say, "Oh, it's so disgusting! Wanna see?"

(I promise, this will not be my response when people start to ask if I'm dilated yet. Which they will, if history is any guide. It seriously becomes hallway conversation.)

Jordan is the only one who actually wants to see. He's fascinated by the state of my belly button. He points to it and pokes it and says, "That's where the baby girl will come out!"

And then he lifts his own shirt to show his belly button.

This morning I put his hands on my tummy while she was moving. I said, "That's your baby sister! Can you feel her moving?"

He nodded. He inspected my belly button very closely. And then said, "Pretty soon, she's going to come visit us!"

Oh, and back on the cat assholes, or rather, an asshole cat...

My friend Kristin in Paris is having this cat problem. She had her male cat snipped yesterday, and as soon as he got home he was all out of control and rapey, totally humping and molesting the other cat.

So she locked him in the bathroom and posted it on Facebook. And poured herself some wine.

She was worried maybe they snipped the wrong thing. I thought it might be post-surgery insanity (does that happen?). Or do male cats go through a rapey period after being de-balled? I suggested sedatives. Seriously, sedate the shit out of that fucker.

Not being a cat person, I wanted to suggest shoving him into a box and heading to Le Animal Shelter tout suite. However, I refrained.

For the cat people out there, any thoughts?
Posted by Lemon Gloria on Friday, January 13, 2012

Email ThisBlogThis!Share to TwitterShare to FacebookShare to Pinterest
Labels: love and happiness, the baby chase, the boy, the pregnant, tummy pics