Sometimes I have to drag my own self down there kicking and screaming, but I'm still working out in our office building's gym at least a couple times a week. You know, the gym with the shiny red button.

So last week it was brought to my attention that my stomach is roughly the same size as the 15-pound medicine ball. Although what it really feels like is this: 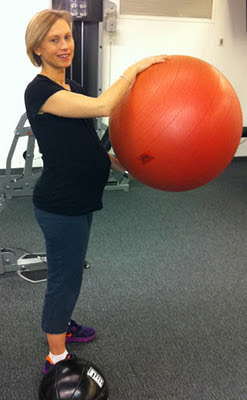 Now, I've tried to be a lot more measured in this pregnancy about what I say on LG, partly because I got berated in my Jordan pregnancy for complaining about how fat and gross I felt. I mean, I got a lot of support, too, so it's not just fear of people thinking I'm an asshole that's holding me back.

Although naturally, I'd rather people didn't think I was an asshole, if I had my druthers.

But I've also tempered my complaining nature because fuck, it took so much time, so much work, and so much money to get to this pregnancy. And part of me is scared that if I'm not grateful enough, it'll get taken away.

Don't step on the crack. Don't walk under ladders. Don't break a mirror. That sort of thing.

Thankfully, with Jordan, I didn't realize how fragile it all can be. I'm well fucking aware with this one. And so, at least publicly, I've tried to hold it in. Hey, look at me with the medicine ball belly!

But you guys, I hit a huge wall this weekend.

Sunday morning I was all kinds of mad at Nick for not loving this sweater I'd gotten him. And he kept saying, "Why are you getting so angry?" Which just made me angrier.

At which point I just leaned over and started sobbing onto the kitchen counter. Like the snuffling, hiccuping, gasping for breath sobbing of abject despair.

Nick curled me in his arms and said he thinks I'm beautiful, and he patted my just-highlighted hair and said, very sweetly, "I think you're beautiful. And I like your new hair." (He's a good man, that one.)

And Jordan came over and asked me if I wanted to put some animals in his backhoe. Which is pretty much like saying I love you so much.

I'm loved, and I'm lucky. I love the family I have. And I'm lucky to be having another baby. I'm grateful, I am. Really and truly.

I just suck at the pregnant. And the pregnant, coupled with the sped-up aging it seems to be doing to me? Super mindfuck.

I am the opposite of glowy. My skin and my hair and my nails are so dry. I have 500 more wrinkles than when I started. When did I get so old and wrinkly?

It's one thing to feel fat and full and exhausted and achey and uncomfortable all the time. But it just feels so unfair to have to feel so hideous on top of it. And so old. So fucking old. It kills my self-esteem.

I feel all superficial saying that, because I am so much more interested in what people are like than what they look like. But it's true. I need to feel attractive in some way, shape or form. And I don't. I just don't.

Email ThisBlogThis!Share to TwitterShare to FacebookShare to Pinterest
Labels: existential crises, the pregnant