Fifteen there's still time for you

Did I tell you about my 15-day no-wine experiement?

So, here's the story. I was complaining to my trainer about my previously-flat, post-baby-squishy stomach. And here let me say: It's not large. I know I'm not fat. I'm not trying to annoy anyone or even being all woe is me.

It's more that I used to have a great stomach and not have to work so terribly hard on it, and now I have to do a lot of ab work and it still likes to peek over my pants when I sit down. It would happily just sit in my lap if I let it.

My body has changed in many, many ways since having children. This is the way that annoys me most. Well, this and the boob flaps.

I know I am not alone in this. It's just post-baby body. Although I do know that not everyone's boobs go away.

One evening I texted a friend of mine - my co-yuppie neighbor - and said, "I don't know about you, but I particularly enjoy how my baby-acquired layer of tummy likes to ooze over the top of my pants when I sit."

To which she responded, "Almost as great as the distended nipples. Hard to pick, really."

Which, yah. Good point there. But as my nipples pretty much stay tucked in place, I don't dwell on them so much as the malleable stomach.

So there I was complaining, and he reached over, squoze the squish that I was whining about, and said, "Stop drinking alcohol. And don't eat carbs at night. No wine. No carbs."

And I was all, "I am old I have two children one of them wakes up and screams at night I am tired life is hard and then we drink."

How can you say no when someone asks for two weeks of rather modest effort?

Fifteen days. How hard is that?

Nick said he'd do it with me. He thought it was a great idea. But it was Friday. He suggested we wait until after the weekend. I agreed.

Day One was Sunday. Sunday went very well. Off to a rousing start. One day down! Fourteen to go!

On Monday I told Kay about it. She was all, "With two kids. Good for you. Let me know how that works out."

Aaaand on Monday night I texted her: 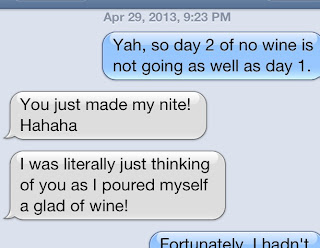 So Day Two was not a success. Nor was Day Three. She checked in on me last night; Day Four had been terrific, and I was headed to bed.

What I'm trying to decide is this: Should I just start over?
Posted by Lemon Gloria on Thursday, May 02, 2013