I can still hear the baby grand in the background. 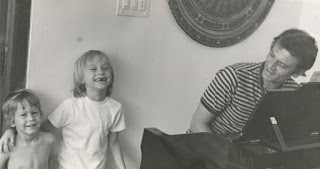 On June 1, I will be walking 18 miles overnight in the 2013 Out of the Darkness Overnight Walk.

When I first heard about it, which was only about a week ago, it struck such a chord. Suicide, as any of you who have been with me for some time know, is all too personal an issue for my family. This month - either May 15 or 16 - marks the four-year anniversary of my dad's death.

You have to agree to raise at least $1,000. As a person who doesn't like to ask others for favors, let alone money, I was nervous when setting up my page. How am I going to get people to give me $1,000?

Nick said, "It's not like you're asking people to give money for you to enjoy yourself in Paris. This is suicide we're talking about. Saving people's lives. Put $2,500 as your fundraising goal."

I put a message on Facebook, and quickly raised almost that amount. So I upped my goal. And I upped it again. Because every dollar matters.

If you are able and inclined to donate to the walk, here's my fundraising page. If you are unable to contribute, I so appreciate your kindness and support.

I'm also putting a badge on my sidebar. I hope this doesn't bug people. As Nick said, it's not for Paris.

And that's just the people I know.

I'm walking for people who have written to me at LG to thank me for writing about suicide, who have shared their own stories of attempts, of depression. I don't know them in person, but I'm walking for them.

I'm walking for everyone who has ever been touched (and by touched of course I mean brutally shoved and shattered) by the suicide of a loved one. This is a lot of people, with a death by suicide every 14 minutes.

I'm walking to help break the stigma of depression and suicide. When I first started talking about it, when my dad was in the hospital in 2007, nearly 30 years after his first attempt (and that many years of silence on our parts), my dad was livid. It wasn't my life. It was his.

He was ashamed, and he was angry. How dare I talk about it?

I was angry, too. It was my life. And I wasn't ashamed. And I was starting to work to repair the damage wrought by almost 30 years of the possibility of losing my dad at any moment and of maintaining the silence.

I'm so sorry that he never found peace with it, and I hope in death he finally did. One of my goals is to help change the culture around mental illness, so that people do not hide in shame and silence, and so that we do not lose more people to suicide.

So I signed up for the walk, and I posted on Facebook. And I waited nervously.

And then, then donations and messages started pouring in. One close friend, who I hadn't seen for 20 years until a brief afternoon with him and his family last fall, donated and said,"I can still hear the baby grand in the background."

You touch people, and they touch you back, if that makes sense. Or, as one of my textile instructors likes to say about the variability of dyeing (not dying), "Everything affects everything."

These messages have made me cry like I haven't in so long. The fact that so many people - some of whom I have never met in person, and others I haven't seen for 25 years - have donated and said that their hearts are with me - this overwhelms me with gratitude, with solidarity.

When I first signed up - without any thought, which is how I tend to do things, I was energized. And then I got all twitchy. Can I actually walk 18 miles overnight? I know I can walk 18 miles...but overnight? You know, after being up for a day?

So then I sat myself down and said, "Lisa. You spent six months getting up every couple hours and feeding a baby with your boobs. You can certainly put one damn foot in front of the other for 18 miles."

And that, my friends, is how I got started with the Out of the Darkness Overnight Walk. And truthfully, the more walkers' stories I read, the more I cannot wait.
Posted by Lemon Gloria on Wednesday, May 08, 2013