Tea: Black, with milk and sugar, but not so much of either

Nick came home last night and was all, "I read your post, and I think you should just stop the cleanse. After tonight, you've done it a whole week. You feel terrible, you're crabby, and I think you've gotten what you need to get out of it."

I wavered. It's only three more days. I know I can stick it out. But I've also done it a whole week, and the author says to evaluate where you are at big points like five and seven days. Sooo, just like that, I could stop feeling so listless and angry.

His position was as follows: I've cleansed. What am I trying to prove? We both already know I'm as stubborn as a mule. (We do.) And I've probably gotten rid of all my SFM. (Lord, it does seem like it.)

Also, I hadn't worn my regular jeans in a week, and they are totally loose. 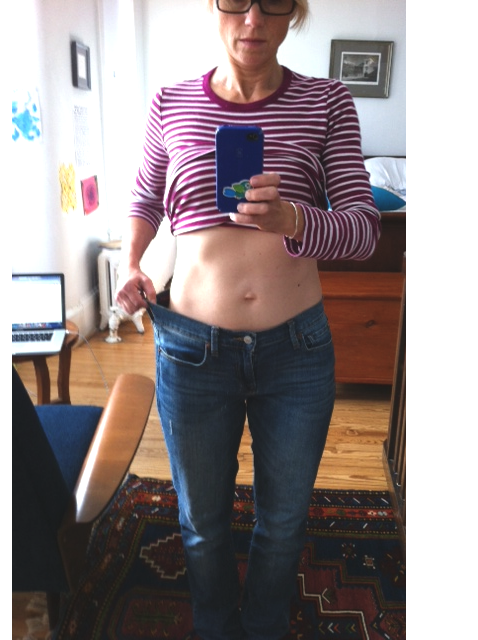 See? I mean, they're not like twice my size. But they used to fit snugly to my waist, hips, and thighs, and they are baggy in all those places. It is much more dramatic from above, looking down, because the gap is huge and you can see down my legs. So I took a picture that way.

But then I realized that really, the picture was all, "Hey! Look in my pants!" Which is just weird and pervy and not at all what I'm trying to demonstrate.

What I guess I'm saying is, I've gotten plenty out of it and yes, I feel guilty for stopping, but it is far outweighed by how nice it feels to head towards energy and away from snapping at everyone. Also. My haircut makes me feel like Brienne of Tarth and so it is, as much as possible without making me look like a headless torso, not in the picture.

You know what I didn't miss, which was totally unexpected? The alcohol. I turn to it so many nights to get through dinner-bath-bed time. I am wondering if that's part of a sugar-fix cycle. No sugar, no cravings for easy sugar.

So I made a smaller, breakfast-sized version of the smoothie I made for Nick, but with a different protein powder, and I had tea, and all of this made me happier. I'm going to keep it all light and vegetarian for the next several days. A salad-y meal with beans for lunch and then green smoothie for dinner.

Last night I slept eight solid hours. Let me repeat this, because it is so huge in my life. Eight. Solid. Hours.

No waking, no interruption. I haven't done this in years. I cannot remember the last time I did this prior to this past week. In general, except for some sleep-killing India antics, I've slept so well  through this cleanse.

This says to me that something I eat regularly is fucking with my sleep. I don't actually ingest a lot of caffeine, and it's almost always tea. I don't have coffee more than a couple times a week, and if so, usually not even a cup.

Are caffeine effects cumulative? I do hope not. I love real tea. I do not love decaf tea. It always tastes a little like floor dust to me.

I'm adding back dairy for a few days and seeing how I feel. Could it be dairy? I'm afraid it's dairy. That will bum me out.

So there you have it. I'm a quitter. A relieved quitter who no longer feels like stabbing anyone/everyone. I'll let you know how it winds up for Nick, though, in case you're interested.

I mean how the cleanse winds up for him. Not the not being stabbed.
Posted by Lemon Gloria on Tuesday, October 14, 2014

Email ThisBlogThis!Share to TwitterShare to FacebookShare to Pinterest
Labels: health and compulsions, marriage