It's 106 miles to Chicago, we got a full tank of gas, half a pack of cigarettes, it's dark...and we're wearing sunglasses. 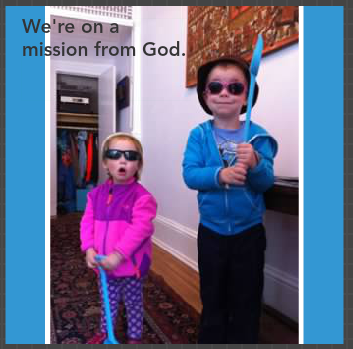 I have started working on photo books, calendars, and holiday cards.

And oh my hell is this time-consuming! It's so fun to review the year, but it takes up a ton of time.

This is the inside page of the book that I'm making for Betty and for Nick's mom. I don't know if the latter will appreciate the humor, but I myself enjoy it too much not to include it.

Going through all these photos has been making me think about how much these little humans have grown over this past year. I mean, they were born with their personalities; that I truly believe. But as they get bigger, more articulate, and more confident, they express them more and more.

When these two play together, it is magical. I love hearing their little voices and their imaginations at work. India is often the bossier of the two, if you can imagine, but they both take after their father in this way.

They now like to play this game, typically in the kitchen when they're in everyone's way, whereby Indian holds onto the back of Jordan's shirt and then he runs around in a circle so she is half flying in the air and he is half strangulated.

They both enjoy it immensely.

I'm trying very hard not to get involved until I absolutely have to, because apparently you are supposed to let your children work out their own conflicts and manage their own relationship to the extent possible.

While Jordan often wants to hit me, charge at me, try to knock me over (seriously - I don't know what it is lately, but it is all about physicality towards Mama), when it's between the two of them, India is the more violent of the two. Jordan tries hard not to do things that will hurt her, while she has no compunctions about braining him.

And then I get involved and they both cry - Jordan because he's been attacked and India because she's being prevented from getting another good whack at him - and it is the kind of scene that makes me want to take a whole bottle of wine into the bathroom and give myself a very long time-out.

But when they are not fighting, they are good little pals.

So I have high hopes that they will stay friends and if one of them goes to prison the other will be right there to greet them with open arms when they get out.
Posted by Lemon Gloria on Thursday, October 30, 2014