Lice are lousy all the time. They suck your blood, drink your wine, say shut up and quit your crying... 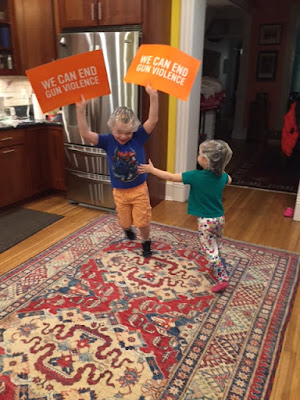 LICE. My kids got lice.

We were late to the lice party at Jordan's school. It's gone around and around. We were lucky. Until we weren't.

So the lice is my new fixation, which I don't think is all that strange, considering the fact that I'm re-washing all our bedding, towels, etc, and we're doing another treatment tonight to be careful.

Nick asked me if this was going to be the new rabies. But since you can't die of it, it's not. Unlike sharks and sinkholes, both of which are deadly. He is ready for it to be over and seems to think I'm making too big a deal of it.

Whereas I am like, if you have to wash 54 loads of laundry and practically shave one kid's head and pick through both with nit combs, there is no such thing as too big a deal.

It IS a big deal.

I mean, a rhinoceros infestation would be much, much worse. (Yes, reading Ionesco in high school has stayed with me for a long damn time. And yes, I know that rhinocerite is a metaphor, but even so. That would really suck.)

For the past couple years we've gotten regular letters from Jordan's school saying lice was going around. He never got it. I thought his hair was too short.

But since we'd received several letters in the last couple months, I've been peering at their heads with some regularity. And thinking how lucky we were.

And on Sunday morning, I found a teeny tiny little bug in Jordan's short short hair. Like, the hair on the back of his head that's so short you can see scalp.

I'd known from discussing lice with other parents last year that I was not up for toxic chemicals. So I sprinted over to CVS and got a metal lice comb, and did some combing and came up with more evidence.

So I doused my kids' heads in olive oil and put shower caps on them. For eight hours. 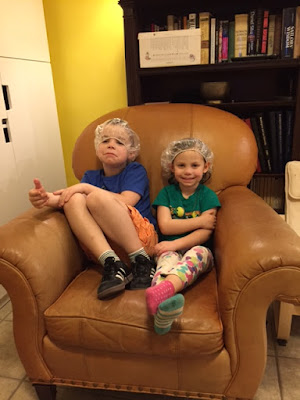 And then I stripped all the beds and started laundry and then went off to a march against gun violence with my friend Victoria. First she inspected my head.

In the beginning, my kids looked at the shower caps as a game. They were kind of like odd little helmets.

Nick took them to the park with their little oiled heads and shower caps on and they got weird looks from a mom and Nick said, "Lice." And she said she figured, and that they'd been through it as well.

As the day wore on and their little heads got all hot and sweaty, they were over it. Still cooperative, just complainy.

So in the last hour we set them up with videos and they forgot about it.

And then it was time for the combing and nitpicking. Nitpicking! I'm going to have such a different visual when I use the verb nitpick in the future.

Anyway, I thought I would fall down and pass out if I ever had to deal with lice, but I have to say, there's something fascinating and satisfying about combing them out.

I mean, if you can get over the fact that these are wee bugs that have set up house on your children's heads.

Although is this worse than parasites living in your intestines? You just can't see those. Unless you have worms. Sometimes you can see them. And Guinea worm is still the grossest thing I can think of.

Can you tell I'm trying to put the lice business in perspective?

Not to minimize lice. Because, lice!

And they are sneaky little bastards and I've been informed that we are going to have to be vigilant for weeks and weeks.

Also, I haven't been as calm and perspective-y in person as I might seem here. So don't be deceived.

Now, since I put it on Facebook all, LICE!, a number of friends recommended Fairy Tales Lice Good-bye, which is non-toxic (and comes with a fabulous comb!) so this evening our entire household is doing that, and then combing again. And as I type I'm rewashing all the sheets, blankets, etc.

Also, I cannot believe that I am now like, ooh, that's a nice nit comb!

We moved so much growing up that I am still like that with boxes. It's seriously hard for me to pass up a sturdy box in case we will need it.

I have been known to exclaim, "Nice box!" while walking down the street. Which turns out to sound really weird.

Email ThisBlogThis!Share to TwitterShare to FacebookShare to Pinterest
Labels: health and compulsions