I just bought a lightbox to help with the dread dark of winter. It has a three-pronged plug.

My Mac does as well. And as such, I needed an extension cord thing that could accommodate them.

This morning I found one in the closet, so I took it and, with great difficulty, because there is not much room between my IKEA closet and the wall, plugged it in. Since the closet is bolted to the wall, there's no scooching it over a wee bit.

So I finally got it plugged in.

And then my damn plugs wouldn't fit. The round hole was too far from the two thin holes. See? 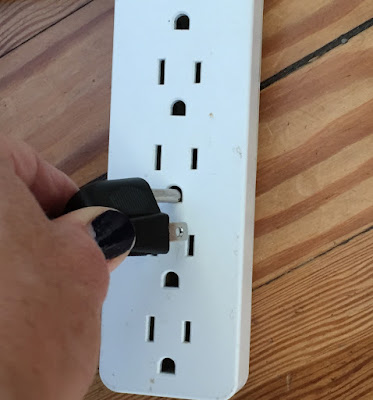 I was all, "Do they really not make these in standard sizes? Are you kidding me with this?"

Maybe this was an old one of my dad's that he'd used in another country, where there was more space between the round prong and the two thing ones? Except that these looked like American plug holes. Plus, it fit into the wall.

It had been so hard to get in. And now I was going to have to buy another one and pry it out of the wall and then go through all the effort to get all those three prongs into the wall without being able to see what I was doing.

Nick came down and I was just about to work it out of the wall. I complained to him. What the hell? Aren't these plug things standard? I was all indignant.

Look! Look how it won't fit!

I picked it up to show him how the plug wouldn't fit. Except...except this time it did. 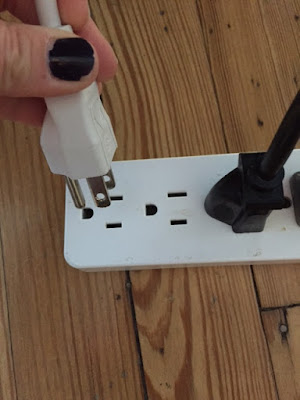 Because you have to plug them in the right way.

It is hard to describe how hard Nick laughed at this. Perhaps you can imagine.

Kind of like the time I was so indignant about that mortgage guy giving me a hard time about our income and a 15-year fixed loan. Must be sexism! Wouldn't make it so hard if I were a man!

Email ThisBlogThis!Share to TwitterShare to FacebookShare to Pinterest
Labels: blonde moments (for lack of a better term), confessions