Goodbye to J Part 2: We Can All Be Sylvia Poggioli, If Only For a Moment 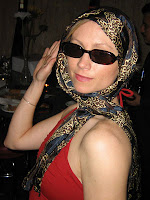 So this post includes the real goodbye to J, which makes me very sad. But before I get to the sad, let me talk about the silly.

Our friends being who they are, people were encouraged to come to J's goodbye party as their favorite NPR celebrity. Being that it is radio, people had to take their best guess as to what people might look like.

Here I am, having briefly borrowed the accoutrements of one man's Sylvia Poggioli costume. It was more effectively humorous on him, as you may imagine.

Because, much like how in my world everyone wants to sleep with Jon Stewart, wouldn't we all jump at the chance to be Sylvia Poggioli? Oh, I think we would.

Just like Halloween in this crowd, there were of course representational costumes. One friend carried around a glass vase with a paper inside that said "ROTH." Ira Glass. Get it? Ira? Glass? Heh. Someone else had on a blazer and an American flag on her cheek. She was This American Life. 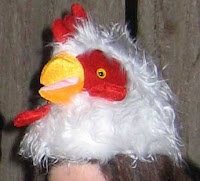 J, lovely, sexy J, had on a totally slinky black dress that fit her perfectly. You looked at her and thought, or if you were me, said out loud, "Wow! You are hot! My God look how hot you are! What have you done to your head?!"

She was all pretty and sexy except, well, except on top of her head? A chicken hat. Why? Well, because she was Cluck. Who? Cluck. Fictional sister of Click and Clack, the Tappit brothers of Car Talk fame. Cluck.

While I love costumes as much as the next person, I had been waiting for the NPR costume epiphany that never arrived. So I just went for girly and wore my new red dress. That I discovered is like a magic dress. I adore it!. I might devote a whole post to it.

I know you are rolling your eyes out there in cyberspace.

Anyway. J walked around taking pictures with her Polaroid camera. And now I really want one. You get the instant gratification with a digital, but there's something about the nostalgia of a Polariod, with the big white borders. Plus, how often do you get to wave your just-taken photo in the air and shake it like a Polaroid picture?

It was a great party, with lots of dancing, good friends, a surprising variety of tall, handsome men, some charming Brits with fun accents who walked in because it looked like fun, and lots of cake. 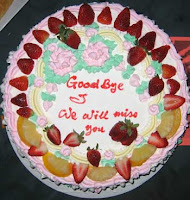 So at the end of the night we hugged goodbye. It's not a real goodbye, though, just a temporary one.

Because my goodness, NY is both a quick train ride and one of the most fabulous cities on the planet! On my already planned imaginary visit, we have ultra-glam martinis somewhere totally overpriced and fabulous. We discuss our mutual appreciation for men in suits. We shop and stroll and catch up. We collaborate on the Sunday Times crossword and it will feel just like brunch at S's place.

But the truth is, saying goodbye is very hard. Frankly, I've done it enough in my lifetime. I would love to never have another goodbye. Ever.

New York is so close. But it's not ten minutes away, where one can, with no planning, meet up at Biddy's or Local 16. It is not, even if you don't see each other all the time, knowing you can at any moment and taking advantage of that fact.

It is not close enough meet up after work and stroll over to the Kennedy Center. To see Turandot, because you both feel that you need more opera in your life, even if the truth, which you later admit to each other, is you get a little bored with it. Because going makes you feel very cultured and you momentarily get swept up in the pageantry.

I don't know if you know the story, but this icy Chinese princess (who is supposed to be exquisitely beautiful, but neither of us were able to suspend reality that much that night) refuses to get married. And so she gives each suitor three riddles. The ones who cannot answer them (and until our hero arrives, none can) are killed. Suitors have been beheaded left and right that year alone!

We were sitting there, listening to her sing the riddles to the suitor, and reading the surtitles so we knew what was actually being said, when all of a sudden J sat bolt upright in her chair. She grabbed my arm.

And said, "This! This is how we should be choosing our husbands! The Hell with this tedious dating we've been doing!"

So, J, you are in my heart, and this is not a real goodbye. I wish you all good things, and I know your NY life is going to be full of great adventures. I will miss you. And here or there, I will see you again very soon.