"I would advise you not to consult geese in matters of spelling. The word is spelled T-E-R-R-I-F-I-C."

Apologies to Wilbur, but it was indeed some pig event.

That Saturday was an utterly perfect summer day. Hot enough to make it oh so easy to keep helping yourself to cold beer but still nice enough to spend hours in a group of a hundred and some people and without feeling that hot, sweaty, crowded summer cranky. You know, the kind of DC hot that usually sets in around now and makes you sweat like a, well, pig, and loathe everyone in sight. There were tons of old friends and a variety of people I'd never met. Our friend J, who we recently said goodbye to, who co-hosted last time, came down from New York for the event. It was a true pleasure to see her.

There were pig tattoos. There were grass skirts. There were coconut bras. If you think I didn't embrace all three enthusiastically, well, you don't know me very well.

It was, however, the last time I'm getting that scantily clad in public. I looked at one of the pictures of me in the coconut bra - which really is tantamount to wearing a bikini top - and I suddenly wondered if I looked like a less-well-endowed white-girl version of Lil' Kim? Alarming and not to be repeated.

But on to more important topics. 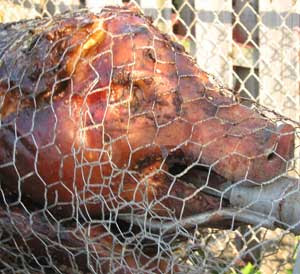 There was a keg. There were all the trappings. And then, of course, there was the pig. On an electric spit.

Because I don't know if you've ever seen a pig on a spit, but basically it seems like they open the pig's mouth, and stick a pole in that end and out the ass. To someone who tends to think of all pigs as Wilbur - Charlotte's Web really resonated with me as a kid - it's horrifying.

But it's like a train wreck or photos of Lindsay Lohan on a night out. You're scared to look, and you kind of cringe as you do, but you also can't help yourself.

I did eat it, but with reservations. Because it's so much easier to eat an animal if you don't literally stare it in the face before doing so. I mean, it's a pig. With a piggy nose, still attached to his piggy head. Which is staring at you from the table. With piggy teeth in his piggy mouth. Well, really, piggy everything. Because it is, after all, a pig.

The pig, or I suppose once it's chopped on a plate I should call it pork, was tender and juicy and perfectly cooked. And there were a million delicious sides. And banana pudding, which I absolutely love, for dessert.