O is for Olive run through with an awl. For example. 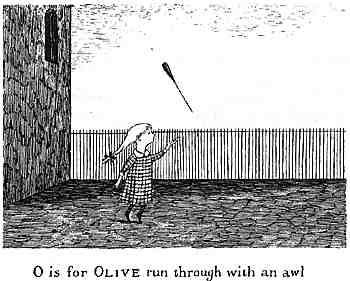 I didn't hear from Nick all day yesterday.

And at the end of the day, a friend asked me what I was doing that night.

"It depends on if Nick is dead or not. If he's still alive, then I'll meet him at his office to ride home. And if he's dead, then I suppose I'll be dealing with that."

Because here is the thing. When I can't get in touch with you, I immediately imagine something horrible has happened.

I jaywalk in DC regularly, so clearly it doesn't keep me from living life on the edge. But I fret about everyone else.

It's pretty unusual for me not to hear from Nick all day. If I call him, he calls me back. Or emails. Even if he's swamped, he typically lets me know he got my message and is too busy in the moment. But is still alive.

I mean, he doesn't put it that way. But I think of it in those terms.

And then yesterday, I called with a concrete question (tickets to Maine - I'm looking at Orbitz - when do you want to fly?). I heard nothing.

So several hours later, I emailed, "Where are you?"

And so I started to fret.

We'd said goodbye at his office building. Maybe he'd gone out for lunch and had gotten hit by a Metro bus? Maybe a big steel beam had fallen on him while he was walking by the office building they're tearing down next to his?

Because if something had happened to him at work - say the photocopy machine had shorted while he was making copies and he'd been electrocuted - someone would surely have called me. No?

I was also trying to find Betty all afternoon. Who, after several unanswered calls, had most likely been swept away in the creek behind their house. It's usually shallow, and she wades in it collecting rocks. But with all the recent rain, it's probably really high and strong.

It's not necessarily a weird blimp accident, but it's always something dramatic and fatal.

These things just pop into my head. And I can feel how terrifying it would be stuck in cold swirly grey water. Or all, "Fuck, I knew I should've wiped up the coffee I spilled right before making photocopies!"

Ridiculous, I know. I do this with everyone I love.

If I don't hear from my parents on a trip, I start fretting about plane crashes, or cars going off the side of a cliff. I pay close attention to the news, which I rarely do otherwise.

And if you go away I'll save every voicemail you leave till you get back. I don't know what purpose this serves, since AT&T automatically deletes them eventually, but somehow it makes me feel better.

Betty and Nick called me back at the same time yesterday evening. She'd been at a doctor's appointment; he'd been slammed at work.

I got an email from my friend today: "I assume Nick is still alive or you'd have let me know."
Posted by Lemon Gloria on Tuesday, May 20, 2008

Email ThisBlogThis!Share to TwitterShare to FacebookShare to Pinterest
Labels: confessions, health and compulsions