It's Friday and I've gotta admit to being a little bored and itching to be outside rather than cooped up trying to act like a responsible adult. So I'm furtively amusing myself.

On my feet: These are my cow shoes. 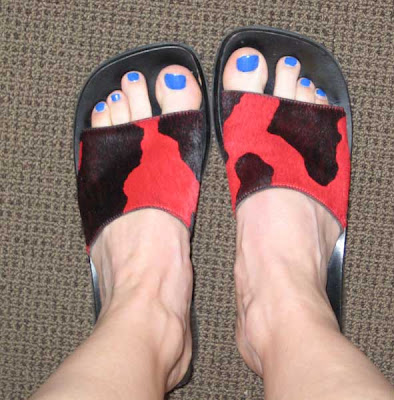 I've had them forever, and there were a number of years where I didn't wear them, because the whole pony shoe thing was out.

But I couldn't bear to get rid of them, because how often do you find shoes with a red cow print? Pretty much never.

And I really embarrassed a friend of mine when buying them, because I insisted that they were actually made of little bits of cut up pony, and I was opposed to the whole idea.

She argued that it was cow, not pony, and that they just call them pony-hair shoes. And so I made her ask a sales clerk, who replied that yes, they're cow, and no, duh, they don't just cut up ponies.

When I put it that way, I don't know that it's much better, and this is making me realize I'm wearing a piece of cow that deliberately looks like a piece of cow, albeit red and black.

One thing I will say is this. I prefer shoes that squeeze my toes together, because I have a very large space between my big toe and then next one. Also, it's not that I only have four toes - it's just that I have extremely silly little toes.

I would change my toes if I could.

So. On my cupboard: "Drop it like it's hot!" stickers.

These are the stickers we wound up making at the end of a long, unsuccessful day of trying to get our pictures taken in a photo booth. I have them on my cupboard at work. 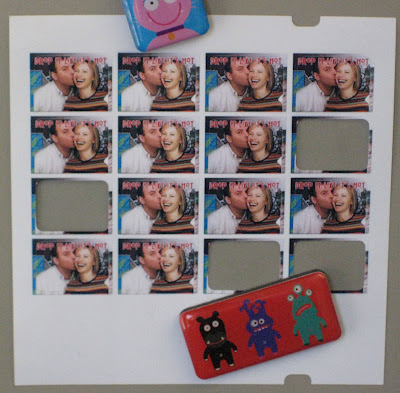 I love these Ugly Doll magnets. In fact, I kind of really want an Ugly Doll. Which seems silly for a grown-up, and so instead I bought magnets - very practical.

I also bought an Ugly Doll pencil case, in which I keep my toothpaste and toothbrush at work. It's all plastic and so you can set it down on the sink counter and if it gets water on it it's easily wiped off. So another utterly practical purchase.

And finally, up our noses: Pollen and such.

You probably thought I was going to say a green M&M, or something equally juvenile, which has been the case before. But no.

I took this picture last weekend when we drove out to the water in Maryland. It's up against a dock where they put boats in, so the water doesn't really move. Which allows the pollen and tree bits to gently settle and swirl on the surface. 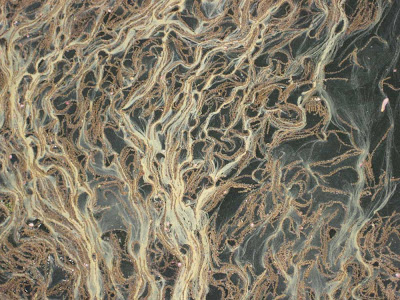 Email ThisBlogThis!Share to TwitterShare to FacebookShare to Pinterest
Labels: creativity