I made a silk charmeuse shawl for each of my bridesmaids.

I've left the image size large, so if you're interested, you can click on them and see details.

It was a labor of love. And a big part of why I was so stressed leading up to the wedding.

I'm glad I did it, and I'd do it over again in a second. But it was a tremendous amount of work, and I was working on them right up to the wedding. Literally.

Here I am, early morning Saturday, September 27. Stretching them out to photograph. Actually, I was ironing them one last time before putting them in gift bags. And Nick was taking photos. 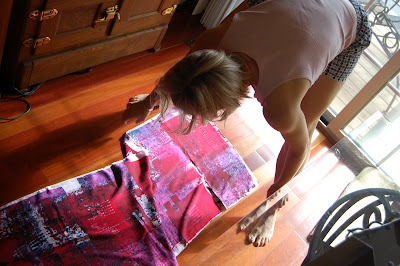 I have photos of some of my bridesmaids wearing them, and I'll get those organized and posted as well.

The reason I was working until the end is as follows. I knew I'd wanted to make their gifts, but my textile class didn't start until the beginning of September. I needed the screen printing equipment in the studio.

Plus, quite frankly, I needed the studio space. Because they were 22"x90" - almost two feet wide and seven and a half feet long.

So class began, and I had an imagine that I wanted to screen print onto each of them. You'll see on each the same flower - very similar to the floral design on my invitations.

But I also wanted each one to be unique, since my friends have such varied personalities and styles. And I needed to make sure that the style of each of these was different than something I'd previously given them. 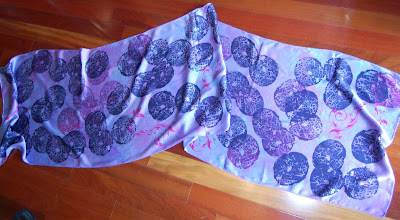 I did what I could at home - some of the pole wrapping, steaming, washing out. I got as much of the prep and clean up work as I could done outside of class time, so I could be as efficient as possible with the studio hours. But still I was there in the studio Wednesday before the wedding, screening, dyeing, messing up my hands. And getting chastised for it.

But you don't really know how they're going to turn out. So you plan one way, and then once you've washed it and ironed it, you look at it again to figure out what kind of layer to do next, so that the personality turns out in the way you want it to.

If that makes sense.

So it was an evolving, shifting process - the designiong, the thinking, the doing, the rethinking, the adding. If I weren't me, it might've gone faster and smoother. But I am.

I think everyone really liked them, and I think I got colors and personalities right. Me, I loved them all, and I was so very excited to give them to my dear, dear friends.

Seriously. I'd gotten orange and pink bags, and printed cards with each of their names on them, with the same design as my invitations. I was honestly jumping up and down giddy giving them their presents.

I included a detail shot of this black one, in the hopes that you can see the flower detail. It didn't come out well in this photo, but it's really shiny and glowy. And it has secret fuchsia flowers sprinkled on it. 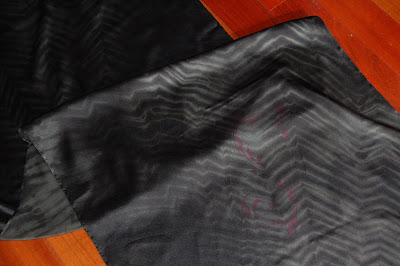