So now you know we are not only lame tourists, but terrible people 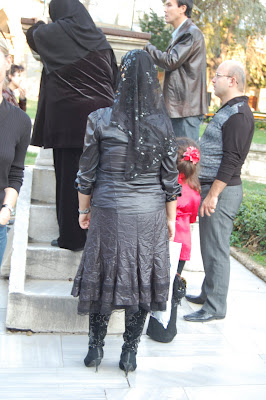 Nick and I are bad tourists.

What I mean is this. We had a number of things we really wanted to see - we took the above photo at the Topkapi palace, which was amazing - but we didn't pack our days seeing stuff. We did a lot of drinking of Efes beer and wandering and whatnot.

And then when we were sightseeing, we'd get distracted.

For example, we spent a whole 20 minutes following this Japanese couple around. Because they had a camera on a stick.

It was really compelling.

They had this pole that was maybe four feet long. And they could perch the camera on the end, pose, and then push a button to take their picture. Ingenious! Self-picture taking without the stretched out arm and awkward contortion because of it!

We saw them do it, but didn't move fast enough to get our camera out.

And so we wasted the next 20 minutes hoping they'd whip it out again. We'd follow them and then when they stopped, we'd take out our camera and say things like, "Oh! This is so beautiful! I definitely have to get a picture of this!"

In case they didn't speak English, we made sure to sound really excited. "Oh! Let's take one of both of us!"

I am still sorry we don't have a picture of them.

And then! Mere hours later! We spotted the woman above. We weren't following her and her family at first, but we kept running into them. And started referring to her as the New Jersey Turkish Woman.

(Apologies to my friends from New Jersey. None of the NJ women I currently know would dress in sequins and sparkly pointy boots and such.)

We took her picture because, well, partly because we missed the Camera on a Stick people. But also because while we saw a number of women with head scarves, she was the sparkliest. Not the least modestly dressed - because we saw a lot of women with tight clothing, wearing nothing to suggest they were in a Muslim country.

But she, she was fully covered, modestly dressed, but still expressing her individuality. Out of deference and caution, we only took a picture from the back. But there was a lot lot lot of bling and decoration. Sequins down the front! Sequins on the scarf! And pointy boots! With more sequins!

We loved it. I wanted to get a better shot of the boots, but we had to be really furtive about this.

See what terrible people we are?
Posted by Lemon Gloria on Tuesday, October 28, 2008