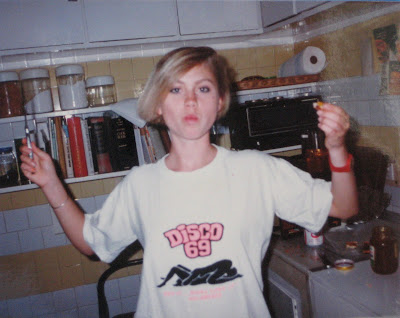 Honest to God. I had no idea what they were up to on my t-shirt. I never gave it a moment of thought.

Also, sorry in advance, mom and dad. You are going to hate all of the following information. You might want to stop reading now.

I bought this shirt at the disco in Greece. A friend and I had spent the night dancing at Disco 69. This is not a euphemism.

Looking at this photo - this terrible t-shirt - I do not know how I was so oblivious. But I was.

It took me years to figure out why my mom was so upset about it.

This is another of the memories I came across while pulling out old photos for our rehearsal dinner slide show. This one didn't, as you might imagine, make the cut.

It takes place our kitchen in India, this little scene. We most likely came home at 11 or 12 and then snuck out again, because my curfew was early. It is probably around 2 or 3 am on a weekend, after a long night of dancing and drinking gin - at that point, gin was our drink of choice - at the disco in Delhi.

My friend Kris took this picture. I know this because one, she was the person I drank and danced and binged the most with, and two, because there are more in the series. We did this regularly - went out partying and then took ridiculous pictures of each other.

I didn't ever wear this shirt out of the house. But I slept in it just to prove that I could do whatever I wanted - my parents weren't the boss of me! (See how much rebellion out of this first-born rule follower? They were so the boss of me.)

The fact that it went through the laundry just made Betty crazy. Somehow, that was enough.

And so here I am, 17, after a night at the disco, wearing my ultra-crass but somehow assertive of my independence Disco 69 t-shirt and eating peanut butter sandwiches and drinking Diet Coke in my parents' kitchen.

Look how how much blue eyeliner I am wearing. You can't tell, even if you enlarge the picture, but I have a tiny blue star painted with eyeliner on my cheek. Because I thought that was cute. And I loved that red Swatch - I wore it forever. Sometimes I'd wear it with another watch, which I also though was a fabulous look. With the pegged jeans and neon.

My judgment, ohhh, it was so lacking in so many areas.
Posted by Lemon Gloria on Thursday, November 06, 2008