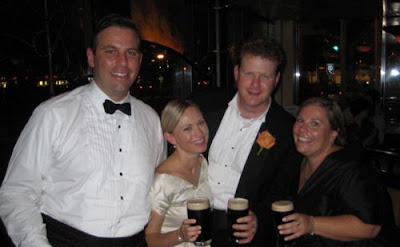 On Friday night a friend and I went to Biddy's for one last pint of Guinness before they closed. I think this was my first goodbye to a bar, ever.

I don't have a picture commemorating this, so the pints from our wedding night will have to do.

We wanted to say goodbye. I'd been going there for, I don't know - a decade?

I loved the fact that it was an Irish pub without the loud Irish bands above which one usually has to shout. Because me, despite a little Irishness in my ancestry, I am not remotely interested in hearing about when Irish eyes are smiling. In fact, maybe the only kind of music I dislike more than Irish folk tunes would be bagpipes.

For a long time, it was our default happy hour place. I'd had drinks with, met, and introduced so many people there over the years. In fact, she and I realized we'd been introduced there by a mutual friend years ago.

I'd had a number of dates there as well (which, I realize differentiates it not from myriad other places in DC). It was a good test. If a guy orders bad beer at a place with such delicious beer on tap...

Not that I am ever judge-y or anything. And I don't know why a man's taste in beer should say anything about his strength of character. Maybe things like this were why I was single for so long?

So we sat at the bar. My friend ordered fish and chips. When her plate arrived, the bartender apologized for lack of utensils. They'd already sold the silverware.

They had a clock up on the wall with just over two hours left to go. You could watch the frantic electronic number spinning down.

We asked him if it was true that it was going to become a cocktail lounge.

He said the entire hotel is undergoing a massive renovation. He didn't precisely know what the bar would be like when they reopened.

I like having a comfy pub, right on the circle.

And really? Does DC need another random cocktail lounge?
Posted by Lemon Gloria on Monday, November 03, 2008