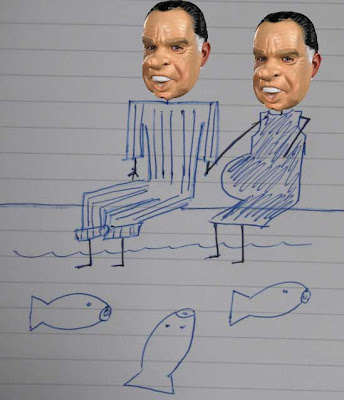 I really want to stick my feet in Nick's koi pond.

This is not a euphemism for anything.

The fact is that I have of late become obsessed with water and ice.

Nick had to strongly discourage me from climbing into one of those ice bag freezers outside a convenience store on Sunday.

So the lobby of Nick's building has this marble koi pond with these pretty orange and white fish. Normally, I find koi kind of creepy, with their big, gaping mouths and their interest in passers-by.

But the other night, while waiting in his lobby, I had this nearly irresistible urge to get in that marble pond.

It just looked so refreshingly chilled. And the stones on the bottom looked so smooth. Even the fish looked cool and smooth.

And I was so hot and tired and sweaty.

Though it's rather shallow, I figured I could submerge a good half my body before anyone even noticed. Plus, the guard knows me. Maybe he wouldn't say anything?

So I confessed this urge to Nick.

He said a couple times per summer people get in trouble for attempting to do just that. The guard has to stop them as they're sitting on the edge, removing shoes and socks.

"One," he said, "those fish are expensive. Moreover," he added very sternly, "it's trashy behavior."

Oh. But. It would feel so good!

So last night I suggested we go in after hours and sit with our feet in the pond. Who would know?

He said if anything happened to the fish, they'd play back the security tapes, and know exactly who was responsible.

Which led me to suggest we sneak in wearing Nixon masks, a la The Ice Storm.

"That's a great idea, Lis. Because they'd never be able to identify the big guy in the seersucker suit holding hands with the hugely pregnant woman. Not as long as the two of them were wearing Nixon masks."