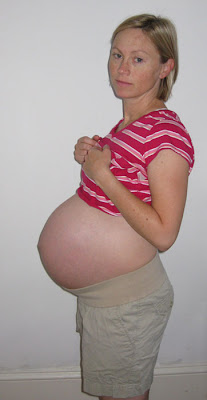 What I realized this week was that I now throw the word "cervix" around like it's nothing.

I mean, I'm not all, "So that cloud formation reminds me of my cervix."

But women at the office who have given birth started asking about the state of my cervix several weeks ago. The first time it happened, I kind of twitched. But you know how rapidly you get used to things?

So I'll pass them in the hall and they'll be all, "What did the OB say? Dilated yet?"

Yah. So my cervix? It has not budged.

The full moon? Did nothing.

I saw my friend Laura a few days ago and she said something like, "I'm really sorry to tell you this, but you just don't look haggard enough to be having your baby yet."

Today, though, don't you think I look haggard enough? I think so.

On Wednesday I had a good talk with my OB about the non-budginess of my cervix, the size of my belly, and an exit strategy for the kid.

Some of you are going to think I'm crazy, but here's what we came to: I've postponed the induction date a week.

Because, here's the thing. He said he'd do whatever I want past my due date. But the fact is that if your body isn't ready, well, it isn't ready for some reason.

We discussed the balance between rushing your body/the kid, and letting him get too big.

It turns out that even though I think my husband is a giant and my belly it is the size of Burkina Faso, in the scheme of baby-house sizes, is not actually shockingly huge.

(On an inappropriate and off-topic side bar, one has to assume that my inability to accurately judge size probably endeared me to more than a few men in my dating career.)

He doesn't think the kid is a Baby of Unusual Size.

And what it comes down to is this.

Much as I want to be un-preg, giving him more of a chance to arrive on his own makes me a lot more mentally and emotionally comfortable.

You don't know how you or your baby will react to induction. I've waited this many years to have a baby in the first place, and spent this many weeks trying to provide a healthy, safe environment for him along the way.

What's another potential week in the scheme?

Which is not to say that at some point next week I won't have thrown rationality entirely out the window and find myself sobbing on the floor and blaming Nick entirely for this.

But at the moment, haggard enough or no, this seems like the best way to go.

And anyway, who doesn't love a little caprice in a pregnant wife?

(Laughs like the madwoman in the attic.)
Posted by Lemon Gloria on Friday, August 07, 2009