Oh so many countries and years have passed. Or, 40 years ago today. 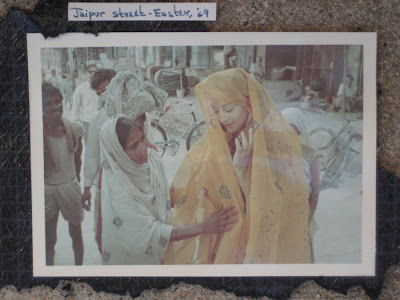 This photo would've been taken about halfway through Betty's pregnancy with me.

And this one was not long after I was born. 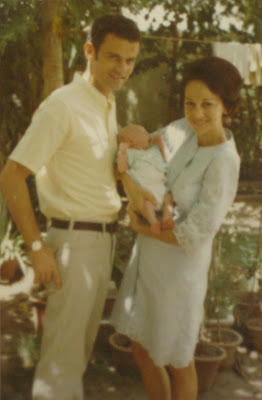 My mom said she woke up on August 13 with labor pains. She was supposed to go shopping that day with her friend Helen.

She picked up the phone to call and tell her she was in labor. But it being India, and telephone service then being sketch, the phones were out.

So she called a taxi and went over to Helen's to tell her that she simply couldn't go shopping, since she'd be having her baby.

And then, knowing labor took a long time, she taxied home, by which time the phones were working. She called my dad, who rushed home to find Betty having a leisurely shower.

They paid the cab, headed in, and a few hours later, Betty had me.

She said there was maybe some yelling of "Fuck you, Dr. Lamaze!" in the process. It's pretty hard to imagine, but I love the idea.

And that's my birthday story.

If you feel so inclined, I'd love to hear something about you, your birthday, your mom, your kids, your dog or cat, or really anything you'd like to share.

Hugs to all of you and thanks for joining me on my birthday!
Posted by Lemon Gloria on Thursday, August 13, 2009

Email ThisBlogThis!Share to TwitterShare to FacebookShare to Pinterest
Labels: family stories, the boy