They have lots of mutual friends 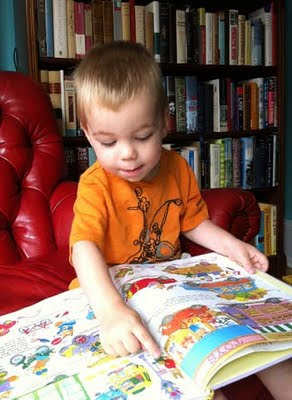 I think I've mentioned Jordan's fascination with Richard Scarry before.

Right now, it's all Cars and Trucks and Things That Go all the time. All. The. Time.

The other day Jordan pointed to a parked car and said, "Looks like a shoe car." And actually, it did.

I was standing at the counter with my back to them. And I was thinking, "Man?" I started mentally going through our books. Man? Waving?

And then Jordan asked, "What's that woman doing?"

"Yes, she is. They have lots of mutual friends."

I turned, curiosity piqued. And there they were, poring over the front page of the New York Times.

The object of their intense scrutiny? Ron Paul and his wife in Iowa.
Posted by Lemon Gloria on Tuesday, August 16, 2011