Our very own Wine & Wig night 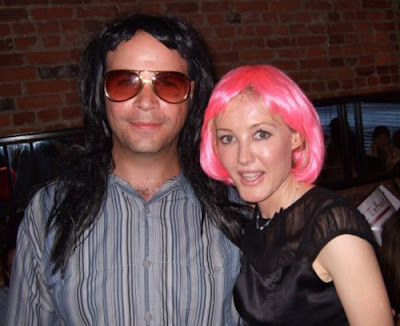 For a goodbye happy hour for the Director, we all went to Cafe L'Enfant. I sent out an email saying that on the last Wednesday of the month they have Wine & Wig night. Half-priced bottles of wine if you wear a wig. Or something wiggish.

Come out for fun! Bring your wig, and if you don't have a wig, then a hairpiece, a unibrow, a merkin! I thought my suggestion of a merkin would generate shock, but it didn't faze anyone, although it did generate some random conversation - on the origin, what one might use one for now, what they might be made out of - that evening. 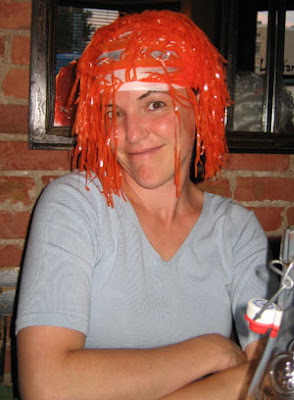 We arrived to find that nobody else was wearing wigs. Because it turns out that they don't update their website. They don't do it in the summer. Too hot for wigs.

We wore our wigs anyway. We had them - why not? Some people had even brought extra wigs. You know, for those friends who showed up without one.

I had to give both Amanda and Sam props. They happily donned a variety of wigs, and not only let me take pictures but let me post them. How adorable does she look in the crazy orange plastic? It's not an easy look to pull off and look attractive. Fetching, even. 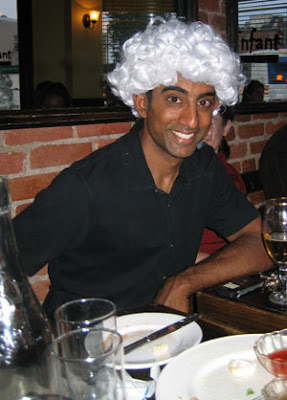 Eventually a few other tables of wig-wearers showed up. It was like a random wig party, just for fun.

We took pictures, we swapped wigs, we took more pictures.

The Director had a friend who really, really wanted Ravi's autograph from having seen him in The QWERTY Kid. She was nervous to ask him. It was so cute. Here she is adoring him, even though he's wearing an orange plastic wig. And half a paste-on moustache. He's much, much more attractive in the movie. Or really anywhere out of this wig. But his hilarious, goofy sense of humor sparkles through. 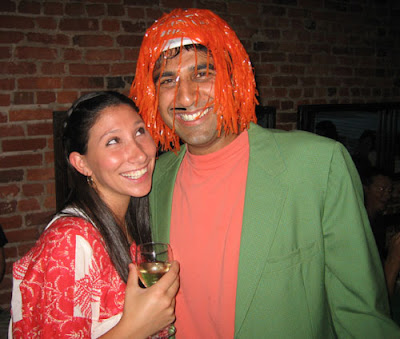 The assortment of wigs really impressed me. Who knew I had so many friends with wigs? And extra to share?

I happen to have this blonde Farrah Fawcett wig from being a Charlie's Angel for Halloween. Which I wore until my friend J offered me an afro wig, which was ever so much more enticing. I think I might get one to wear out for fun sometimes.

The Director used to work on movies, which I think might be why he owns that heavy metalish black wig he's in above. Quite frankly, his wig was sort of a problem for me that evening, I must admit. Because I just couldn't get past the ugly wig and glasses to want to kiss him. I knew he was cute underneath. I knew I was actually attracted to him. But every time I looked at him I had a visceral reaction to the ratty long black hair. With bangs. I think he got a little insulted, actually.

But back to the plethora of wigs. Our charming friend Monique, she just happens to have an extensive wig collection. How many people do you know who can pull out a stunning pink bob on a moment's notice? And look that beautiful in it? 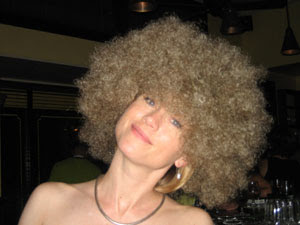 To sum up, we all drank too much Belgian beer, toasted the Director and his new life in NY, took pictures in our own wigs, swapped wigs and took more pictures, gave paste-on moustaches to strangers, and generally had a great time.

I'd do a spontaneous wig night anywhere in a second. So fun!
Posted by Lemon Gloria on Thursday, July 05, 2007