I think it's time to pass on the cow hooves 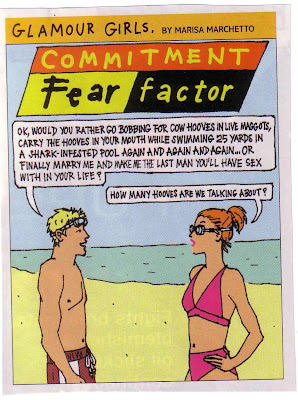 I think it's time to pass this on to a single woman. You want it? It's yours.

I cut it out of a magazine a number of years ago, and it's been on my fridge ever since.

It made me laugh, and for so long I could identify very strongly with it, actually. In my 20s I knew people my age or younger who would begin relationships with the expectation that they would be forever. I thought there was something weird about them.

Me, I would begin relationships with the expectation that they would end.

Because of course there's nothing weird about that.

For the longest time I was all, "Don't get attached to me, I might be moving on. This is nice for now. and I love you now. But don't get attached. Because I'll probably leave you. Not because of you. Just because, well, you never know."

How much did it suck to get attached to me? Immensely. I have huge regrets about a couple guys I really, really hurt.

And, shockingly enough, you can't hurt someone and then all of a sudden after a while be like, "Yeah, I meant it before when I didn't want to commit and would rather bob for cow hooves in live maggots and swim in shark-infested water, but now, as a person, I'm ready. I've changed."

But you might have more luck navigating shark infested waters.

I could talk about time and place and who I was then and who I am now - because all of those things figure in.

And I believe people hit the readiness to commit point at very different times. Sometimes you meet someone amazing and everything about them is perfect, except they're just not in the right place. And until they are, it doesn't matter how incredible you are.

Because it's not about you.

For me, it took getting to a point where I was really good with myself. I simply couldn't appreciate another person enough to have a very loving, healthy relationship before I got to that point with me.

So I was terrified of committing. I was more used to change than constancy. Motion was comfortable. Change was the solution to everything. Even if change kept me frenzied and off-kilter, well, sure those states were uncomfortable. But familiar - oh so familiar.

As a result, I have had a ton of jobs, a plethora of boyfriends, and lived in myriad places.

Committing to someone for ever and ever - which, except for kids, is the biggest commitment imaginable - made me twitch so hard.

I don't know how many cow hooves I'd have agreed to swim with, but for many years, it would have been a lot.
Posted by Lemon Gloria on Friday, March 14, 2008