Which, of course, is tantamount to saying Al Gore introduced us 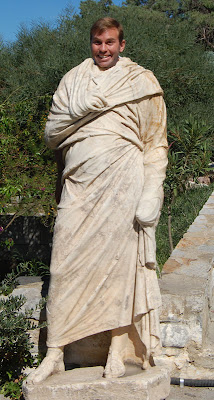 What many of you don't know is that I met Nick on the Internets.

And I realize this photo makes you want to rush out and sign up on one of those dating sites right now.

(Incidentally, we resisted the temptation to take photos of random Turkish tourists posing in the same inane way.)

By the time we met, as you do know, I'd been on approximately 794 gazillion dates. Some good, some bad, and until Nick all ultimately winding up with me girding myself for yet another first date.

So last week, we met at the Tabard to celebrate our anniversary.

When I arrived, he was sitting on the same couch as the year prior. This time he was holding a lovely pink and white bouquet of Stargazers; this time I was carrying my little black Dansko commuting clogs in a CVS bag.

After kissing me hello, the first thing he said was, "Don't look now, but the woman sitting at one o'clock has been waiting for her date for a while."

Don't look now? How can you ever not look when someone says that?

Because I have trouble translating a clock into a room, I went around the dial, woman by woman, annoying my husband, until finally arriving at the correct person.

It turned out that while Nick was waiting, this blonde kept looking at him like maybe she knew him. And then he started to wonder if she was an old girlfriend who he hadn't seen in years. She looked like she could be.

She was waiting for a date. And apparently, instead of saying he mistook her for someone else, Nick got all flustered and was all, "Oh! No! Waiting! I'm waiting! For! My wife! I have a wife!" and flailed around with his flowers, brandishing his wedding band.

I'm sure this wasn't at all awkward.

So we sat on the couch, acutely aware that this woman 10 feet away was waiting for her date.

I am sure the fact that she knew we knew made it all the more awkward. And then Nick kept glancing over, and checking the door all, "Where is he?"

"Stop looking. You're just going to make her feel bad."

You know, it was so close to home for both of us. We had both been her. Although neither of us had been stood up, we'd both been that waiting person over and over and over. At some point in my dating career I decided that the men who were late to first dates were not actually worth waiting for. They always turned out to be rude about other things.

She checked her phone, left the room - to make a call? to take a call? - then came back and sat down.

Nick whispered, "Where is he? What's wrong with that asshole?"

She probably waited about 20 minutes from the time I got there. And then she gathered her things and left.

Did Chris stand her up? Did he cancel? Had she gotten a message when she checked her phone? Or did she just get tired of waiting?

It felt, in an odd little way, like a personal loss.
Posted by Lemon Gloria on Tuesday, November 18, 2008