A year ago tonight. Or, my last first date. 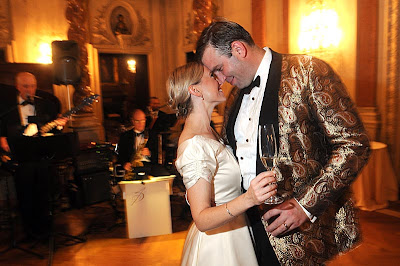 A year ago tonight I hurried through the door of the Tabard Inn, flustered because I was a couple minutes late, sweaty from my walk in the sprinkly rain.

You can imagine what I was like rushing in from the cold, slightly discombobulated, cheeks flushed, pulling off my orangey scarf with one hand, the pink wool hat with the other - both with my usual grace. And cursing myself for having left late and being forced to rush.

The bar of the Tabard, if you don't know it, is like an old formal living room. There's a fire and all these low couches. The light are low. Not as in sexy loungey low. More like turn of the century low tech low. The last century.

It's all very charming, if occasionally hard to read a wine list, I assure you.

I was de-scarfing, running fingers through hat hair, and scanning the room when Nick stood up, smiled, and said hello.

He looked all clean and starched and crispy and cute. He had removed his jacket, but still had on his tie. His shirt was monogrammed. I tried to remember if I knew anything about his politics.

I sat down, and my glasses - which I'd started wearing for dates so guys would take me seriously - immediately fogged up. Which Nick immediately pointed out.

I knew right then I could really like him.

What I didn't know was that I'd met someone amazing who would just think I was the best thing ever. Who would be sweet and kind and honest and fair, from the very beginning. Who would actually, honest-to-God love me for me.

Which is precisely why I keep telling people to stick with the dating business, however you're doing it.

Yes, it gets dreadful to go on one date after another after another. And at a certain point you think, fuck, I simply cannot put on one more smile and act like I'm excited to have a drink with someone who will most likely either bore the crap out of me or do something annoying that makes me want to pinch him, hard, before the evening is over.

But honestly, I swear to you, your person is out there. You're not necessarily right for everyone, but you are perfect for someone who will be perfect back for you.

Somewhere during the first drink Nick got up to go to the bathroom. And when he returned, I was eavesdropping on the group next to us. I cannot remember what they were talking about, but at the time it was odd enough that I tipped my head towards them, gave him a quick synopsis, and then we sat in silence for a bit, both leaning their direction.

At that point he asked if I'd like another glass of wine. Or if I'd like to eat something.

And I said that while I would love to say yes to the wine, the problem was that at glass two, I tended to lose my filter.

He nodded his head. "I had an old girlfriend who was constantly interrupting me in the middle of a story to say 'Filter! Filter!' - I know how this is."

And that, my friends, was one year ago tonight.
Posted by Lemon Gloria on Thursday, November 13, 2008