Buttons, laces, clips, goals, and my utter inability to take things off before putting things on 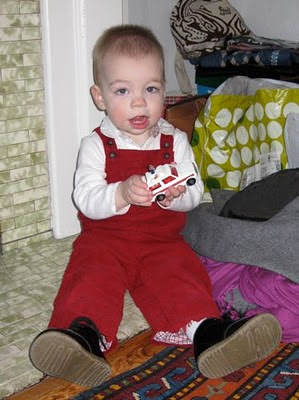 One of my goals for this year is to sew on missing buttons, hooks, etc, and not just clip and staple my clothes together like a hobo.

I don't know if hobos do that, but you know what I mean.

Also, see those shoes J is wearing in the photo? He chewed one of the shoelaces in half. Yes, like a dog.

I need do to something about that. Along with the buttons.

Which I haven't done so far, but I still have the bulk of the year to hit this goal. But what this leads me to is this: There are people who learn and people who don't.

And I think I fall in the latter category.

Because I am one of those people who will put a T-shirt on over her head without taking off her glasses. I know it's a bad idea, I know it's going to jam my glasses onto my nose, and yet each time I somehow think that this time it'll be different.

It's the same with pulling pants on over shoes.

It's always faster, if you decide to change pants after you've put on your shoes, to take the damn shoes off, rather than laboriously working one pants leg and then the other off over the shoes. And then pulling on the new pants. And maybe falling over in the process. Because even with boot cut, it's hard to squeezle your shoes through pants legs.

It's like the binder clips. I know it hurt last time, and the time before, but I still have that curiosity.

I wonder what this means?

Happy weekend, all!
Posted by Lemon Gloria on Friday, January 07, 2011

Email ThisBlogThis!Share to TwitterShare to FacebookShare to Pinterest
Labels: clothing and shoes, there's something wrong with us